In the Tv series "Gilmore Girls" we can see Sherilyn Fenn playing two different roles: First, we see her as Sasha, an on-off partner of Jess' real father, then again as Anna - Luke's old girlfriend who, unknowingly to him, is also a mother of his child called April. 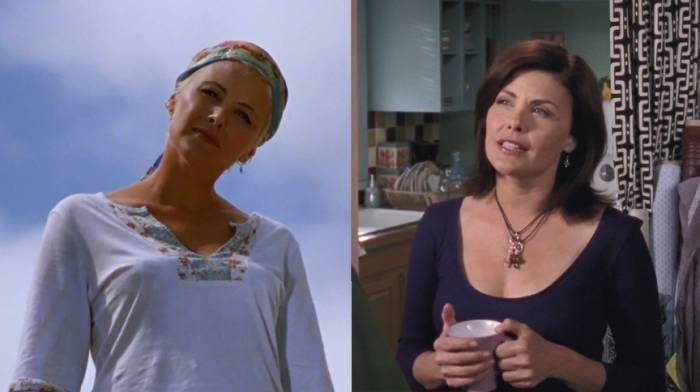 What's even more interesting, both characters are quite similar: both are single mothers raising "tween" daughters and both daughters are smart but eccentric girls (Sasha's girl is seen briefly while reading a book in a closet while the first appearance of April is during her "who's my daddy?" school project), both are portrayed as sort of artists/free spirits, even their houses look similar (minus the dogs that Sasha rescues). You can't stop having a feeling, that director reused not only an actress but also the character.

Was there any reason for that? Was that supposed to suggest that Luke and Jess father (whom Luke hates) are not so different?

Amy Sherman-Palladino is a fan of hers:

Sherilyn Fenn was Amy Sherman-Palladino’s first choice to play Lorelai Gilmore, but was unavailable due to other commitments.

The episode where she played Jess' father's girlfriend was originally a backdoor pilot for a spin-off show, but that never happened. Per Wikipedia:

In 2003, Fenn appeared on The WB's Gilmore Girls as Sasha, the girlfriend of Jess Mariano's estranged father (played by Rob Estes) in the season-three episode "Here Comes the Son", which was the back-door pilot for a California-set spin-off titled Windward Circle, that was to have starred Milo Ventimiglia, Estes, and Fenn. But the network dropped the project, citing cost issues due to filming on location in Venice, California.

That same Wikipedia page also explains her reappearance as a different character:

In 2006, Fenn reteamed with Amy Sherman-Palladino and reappeared in the sixth and seventh seasons of Gilmore Girls as Anna Nardini, the ex-girlfriend of Luke Danes (played by Scott Patterson) and protective mother to his daughter April. Since the failure of the 2003 Gilmore Girls spin-off project, Sherman-Palladino had continued to want to work with Fenn again, and she wrote the character of Anna with her in mind. When asked why she cast Fenn for two different roles on Gilmore Girls, Sherman-Palladino explained:

I love Sherilyn so much and I don't care. One thing about the show is I just want the best people. I've just been looking constantly for a time to work with Sherilyn, and I'm getting very old and I could just get hit by a truck at any minute. I just simply can't put it off that long, so I'd just rather get her in and have her part of my world.

Not the answer you're looking for? Browse other questions tagged character gilmore-girls .

21
Why did they call Harvey a two face even before the accident?
10
Why does the accent of Leonardo DiCaprio sound so different in Blood Diamond?
3
Why was Schillinger so brutal in the very beginning even if he hoped for parole?
17
Why don't the Bond girls return in subsequent movies?
5
Why weren't J.A.R.V.I.S. & Jarvis played by the same actor in MCU?
12
Are the two main characters in the movie inspired by any particular singer’s personal life or biographies?
1
Why did all the Characters in “Hugo” have English Accents?
1
When did Jackson decide not to be the town selectman in Gilmore Girls?