What happened to Rhaegal?

In Game of Thrones S08E03 ("The Long Night"), the Night King's dragon tore at the one Jon Snow rides (Rhaegal). He falls off of it and we don't see the dragon anymore, is it dead?

He falls off of it and we don't see the dragon anymore, is it dead?

In Game of Thrones season 8 “The Long Night”, Daenerys rides Drogon in battle while Jon is atop Rhaegal, and when they spot the Night King riding Viserion, the undead ice dragon, they attack. The dragons tear into one another as the Night King has Viserion try to pull Jon off Rhaegal's back. Daenerys and Drogon beat him away, knocking the Night King off of Viserion and plummeting to the ground. Viserion then flies off, but Rhaegal has been badly injured in the fight and crashes, sending Jon falling off his back. And though it appears like Rhaegal could have died from those injuries (he doesn't appear again in the episode), the preview for next week's Game of Thrones confirms that Jon's dragon does survive. A distinctly green dragon flies across the screen above one of Daenerys' ships at the :19 second mark, while Sansa watches two dragons flying above Winterfell at :22 in the trailer. 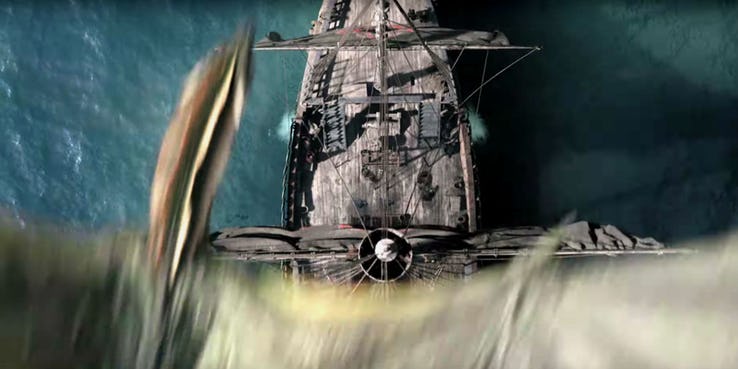 1
After episode 3 of season 8, how many dragons do the allies have?

71
Why did the Night King attack the furthest target first?
9
How long were Jon and company on the island?
10
Why didn't the Night King throw the spear at Jon Snow and team?
5
Why did Jon Snow refuse to escape with Daenerys when he had the chance
5
What is the extent of damage that Viserion's blue fire can cause?
3
Why was Jon snow resting with his dragon on the wall?
7
What happened to Ghost?
33
Why wasn't the Night King naked in S08E03?