Is there an in-universe explanation for particular group of superheroes in Endgame?

During the final battle in Avengers: Endgame, there is a fantastic moment when all the female superheroes come together to face Thanos. The group begins small, then more women join, and then even more. It's very moving, but is there an in-universe reason why no men joined such a large and seemingly random group?

(Obviously the same argument could be made about male-only groups during various battles, but this grouping seems more intentional.)

However, multiple articles show it as a pure fan-service. Slate, for example, comments

During the final showdown with Thanos for the fate of the universe, Captain Marvel, Valkyrie, Okoye, the Wasp, and several other female characters get in formation, presumably for audiences to rally around Marvel’s commitment to gender equality and women’s representation.

Pursuant to what the accepted answer says, a recent interview explains that the writers hesitated a bit about keeping the scene, but eventually couldn't bring themselves to cut it out, because it was so cool. There's no mention being made of a particular group taken from the comics, cartoon or something; rather a general MCU trend to have "team-ups".

How did you coordinate the moment where all the female Marvel heroes come together?

McFEELY There was much conversation. Is that delightful or is it pandering? We went around and around on that. Ultimately we went, we like it too much.

MARKUS Part of the fun of the “Avengers” movies has always been team-ups. Marvel has been amassing this huge roster of characters. You’ve got crazy aliens. You’ve got that many badass women. You’ve got three or four people in Iron Man suits.

‘Avengers: Endgame’: The Screenwriters Answer Every Question You Might Have, Dave Itzkoff for the New York Times, April 29th, 2019

This could be a nod the A-Force comic-book series, where it features an all-female Avengers line-up. It even featured Captain Marvel at some point.

A-Force was an ongoing comic book series published by Marvel Comics that debuted in May 2015 as a part of Marvel's "Secret Wars" crossover storyline. The series, created by writers G. Willow Wilson and Marguerite Bennett and artist Jorge Molina, features Marvel's first all-female team of Avengers. The team first appeared as part of an alternate universe during "Secret Wars" but later reemerged in Marvel's primary continuity. A-Force ended in October 2016 due to poor sales despite favorable reviews from critics and was described as being "decidedly feminist". 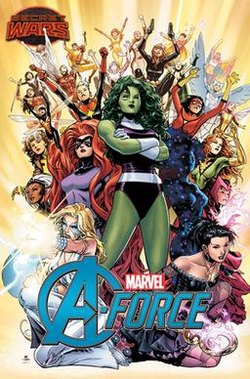 But as @Paulie_D and the other answers said, it could just be a nice bit of fan-service and female empowerment from the creators.

9
Is there an explanation for Batroc's accent?
12
Is there a grandfather paradox in Endgame?
22
How many timelines are there after Avengers Endgame?
24
Given what happens in Endgame, why doesn't Dormammu come back to attack the universe?
3
State of the universe and the Infinity Stones at the end of Endgame?
5
Is there any discussion about effects of snap in Avengers: Endgame?
2
Are there duplicate space stones in the past in Endgame?
17
After Endgame, aren't there still Thanos-es in every alternate timeline?
22
Why does "Endgame​" have its particular time travel theory?