Who is the character that appears at the end of Endgame?

In Avengers: Endgame, Pepper Potts gets an iron suit at the climax fight scene. Is this a known character from the comics source? What is the name of this suit and character?

It's not named in the movie but in the comics it's called the "Rescue Suit".

Spinning out of the Eisner-winning INVINCIBLE IRON MAN! When Tony Stark needed to save Pepper Potts' life, he gave her the Iron Man treatment -- with a repulsor chest implant and a suit of armor to call her own! Pepper went on to become Rescue, one of the heroes of the fan-favorite, critically acclaimed arc WORLD'S MOST WANTED! Now see one of Rescue's incredible solo adventures, as Pepper Potts lets loose with her bleeding-edge suit and her astonishing power! 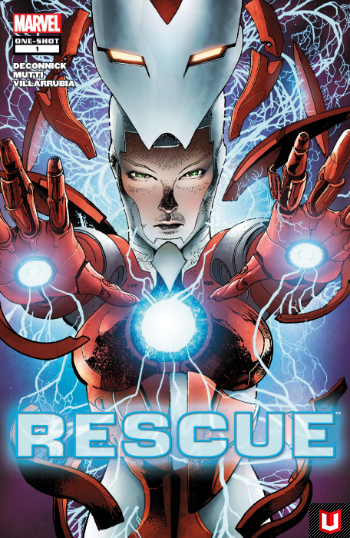 Not the answer you're looking for? Browse other questions tagged character marvel-cinematic-universe avengers-endgame .

10
Why didn't Tony Stark order Jarvis to save Pepper Potts?
4
How accurate to the comics is the Iron spider suit from Infinity War?
15
What is the point of naming Tony Stark's dream son after his comic book rival?
20
What happens to Mjolnir (Thor's hammer) at the end of Endgame?
18
How can Captain America's shield get damaged?
4
Who are all the people at the funeral?
3
Is this character still alive after the events of "Avengers: Endgame"?
40
How can Iron Man's suit withstand this?
24
What is the addition in the re-released version of Avengers: Endgame?