What does Nausicaa see when she rescues the princess from the Tolmekian ship?

When Nausicaa unbuttons the princess' shirt after rescuing her from the Tolmekian airship crash, what does she see that surprises and angers her?

I think this must be the Control Stone, as is made explicit in the manga the film was based on: 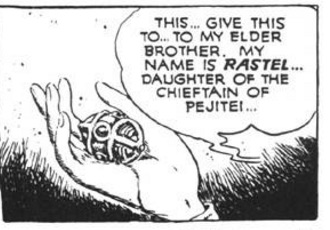 This stone is "a small, ornately carved sphere, in the shape of an egg. It is used to control Ohma, the God [or Giant] Warrior".
In the manga, princess Rastel (Lastelle in the film) of Pejitei hands it over to Nausicaä right before she dies.

Sidenote: The stone doesn't make its appearance in the film at all. Later on in the manga, after the events the film was based on, Nausicaä gains control over the God/Giant Warrior (in Vol. 4 of the Nausicaa of the Valley of Wind Perfect Collection, apparently).

Princess Lastelle's wounds seems to be the alternative and more common explanation. I found one more forum thread where this question was asked, and it offers that same interpretation.
This is repeated in a few more places I was able to find:

The book The Anime Art of Hayao Miyazaki by Dani Cavallaro:

Not the answer you're looking for? Browse other questions tagged plot-explanation nausicaa-of-the-valley-of-the-wind .

17
Why was the princess rescued in the first place?
2
What horrible thing does Casey see?
5
What does Phoebe mean when she says "I bet they're doing it"
7
Why didn't Dennis see Casey when he entered the car?
6
What attracted Selby to Lee when she first met her?
7
Why did the Tolmekians and villagers get into a battle over the valley forest?
6
Does the Forest Spirit die at the end of Princess Mononoke?
1
Why does Hugh/Jeff still see the entity?
4
What do the signals between the Tolmekian ships mean before they arrive in the Valley of the Wind?