Why is this picture used in the opening titles of Cheers, and where is it from?

The following image is from the sitcom Cheers title sequence. 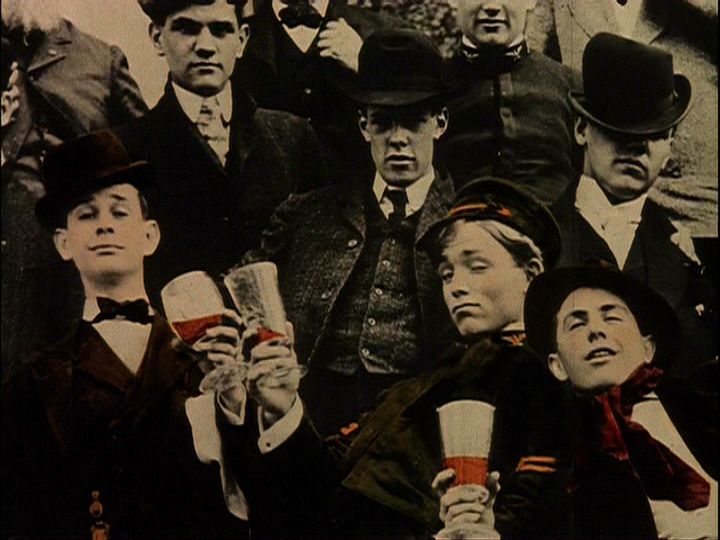 Can anyone tell me where this image is from and why it is used in Cheers.

Some say it refers to the Boston Red Sox winning the World Series in 1918, others say it refers to winning World War II (refering to the "We win!" headline of newspapers), and there are more random suggestions too. But there is no definite answer to it.

The images were taken from old archives of photographs, and then treated to look older. The entire sequence was created by Castle/Bryant/Johnsen, Inc. An original, untreated photograph can be seen here: http://www.shorpy.com/node/7798. The newspaper headline "We win!" refers to the ending of prohibition.

There are many similar questions all around the Internet, but there is no answer provided by the officials.

The "We Win" photo is from the September 29, 1948 late afternoon edition of the Boston newspaper. It refers to the Boston Braves clinching their only pennant with a victory that afternoon in Brooklyn coupled with the Cardinals losing to the Pirates. (The line score shown below the headline is from the game in Brooklyn.)

Why is this picture used in the opening titles of Cheers

The half-hour comedy sitcom was (mostly) about a Boston bar/pub, and the regulars who were there. It was supposedly a bar situated near to Boston's baseball stadium. Sam Malone was an ex-professional baseball player, and the character of Coach was his coach earlier in life. So the initial photo-montage was all related to Boston, baseball and specifically Boston baseball.

This is similar to the photo-montage used in the titles of Southland, a one-hour drama concerning South Los Angeles police precinct and its officers. The photos used there were all related to well known events detected and discovered by the real officers of "Southland."

I found three pics from the opening credits to Cheers which I Googled it. One is called Saturday night at the Saloon by Russell Lee in Craigsville, MN. That's John Ratzenberger's pic. The other is Rudy John's barbershop in Junction City, KS. That pic came after Ted and Shelley's pic from the first through the third season. Nick Colasanto's pic is from the Irish Lion back bar in Bloomington, IN.

Not the answer you're looking for? Browse other questions tagged credits cheers .

70
What rules govern how TV show opening credits are structured?
1
Sign in Sam's office
21
When did Opening Credits become Closing Credits?
6
In which Game of Thrones episode(s) the opening sequence shows the greatest number of locations?
31
Why does Peter Dinklage's name appear first in the opening credits?
2
From the start of Cheers, does Sam ever drink alcohol?
55
Is this bar slide trick shown on Cheers real or a visual effect?
1
What are all the tie-ins and spin-offs from Cheers?
3
How was The Sopranos title sequence changed after September 11th, 2001?