Where did Arya get these scars?

In S08E02 of Game of Thrones we see that Arya has two vertical scars on the side of her abdomen.

Was there an event portrayed in the series that shows how she got these scars?

There are many wild fan-theories circulating, but there has been no definitive answer provided. It's most probable that she received them sometime in her fight with the Waif.

On the following episode, "No One," Arya sustained multiple injuries while running away through the streets of Braavos. She fell down a massive flight of stairs (and probably broke a few ribs) before managing to find her sword.

Arya managed to kill The Waif in the following fight scene — but it isn't shown onscreen, so it's possible that that's when Arya received the scars on the side of her torso.

Although this seems likely no canon answer exists (yet).

I believe the scars are meant to be the ones shown when she was ambushed by the Waif when she first booked a ship to leave Bravos, in Season 6, Episode 7.

You can see in the photo include in the article referenced in Niffler's answer that the stab "to the stomach" captured there is pretty much coming almost straight in from the side. 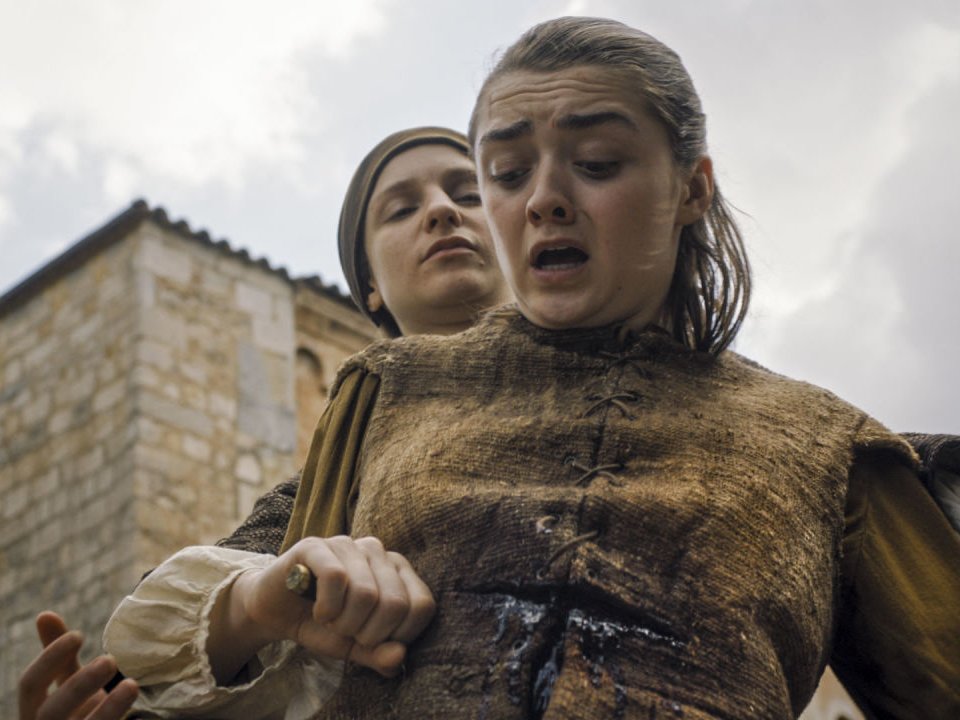 Also, in this video, you see the first stab comes in from the side, the second one seems more central to the belly, and the Waif keeps the knife in to twist it in the wound, but when they cut back to it, the location of that stab was moved to the side, as well, so a bit of discontinuity on their part. Potentially, both wounds are being delivered more laterally than centrally. In both cases, the wounds match the Waif using her right hand, from behind.

A rear wound might be from an exit wound, but, more likely, I think they took some license/liberty and moved the scars to be more from the side to make the love scene an easier scene to shoot. Showing the scars and being able to see Gendry's noticing the scars in one shot, or to show them without requiring frontal exposure for the actress. If the scars are shown more frontally, you'd have to do more to show just part of the actress, to avoid showing body stockings or whatever else they were able to use from the angles they incorporated, and there would be no way to show the scars and Gendry's face in the same shot.

33
Why did Arya refuse to end it?
10
Has Arya forgiven people?
25
Why did Arya Stark lose her vision?
49
Why can Arya still use the faces?
25
Why did Nymeria leave Arya?
40
Why did Arya not kill the Lannister soldiers she encountered in the Riverlands?
42
How did Arya manage to disguise herself?
8
Does Bran know that Arya is a faceless man?
4
Why did this woman want Arya to have this object?
31
How come Arya Stark wasn't hurt by this in Game of Thrones Season 8 Episode 5?