What is the explanation for the laughing ostrich meme in Family Guy?

In Family Guy, there is a recurrent meme of an ostrich who sarcastically laughs "ha hahhhh": 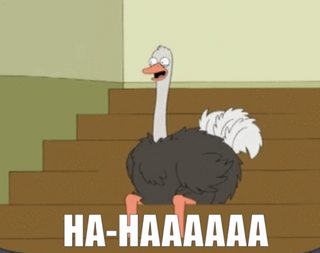 Is there an explanation or back story for this meme?

He appears in several later episodes, reprising his role as the ostrich laughing at a lame joke. In one episode he is identified as "Eddie" by other ostriches. That is the extent of his backstory.

Not the answer you're looking for? Browse other questions tagged reference family-guy .

8
Family Guy ep 113 (Road to Germany) scene explanation
10
Why does everyone hate Meg?
6
How many dogs can talk in Family Guy
8
Meg having cake in the bathtub reference
2
What references are there in Stewie's Music Video in Family Guy?
5
How is copyright handled when Family Guy reused old footage?
5
What is the phrase "Paramedics, come on down!" in Family Guy referencing
13
Watching Stewie sleep and rubbing knife against face reference?
23
Meth dealer reference in Family Guy