Throughout Shazam!, we see many references to the number 7.

Wizard: My job is to protect you the seven worlds of the seven main sins.

But at the end, Shazam! splits his power with his 5 siblings, and we have a total of six heroes. I half expected an additional hero to show up, or some way of having seven heroes to battle the seven sins. This could mean Billy had all the powers, and each other hero specialized in a specific aspect (similar to what we saw, one had lightning, other had speed, etc).

Does the number 7 have a deeper meaning in the Shazam universe? Will a 7th hero be found? Or was this just something based on the 7 deadly sins, and 6 super-heroes was just randomly based on the amount of kids in the foster family?

It's like that in comics too in current version:

The Shazam Family was reintroduced during DC Comics' continuity-altering Flashpoint miniseries in 2011, as six kids who all spoke "Shazam!" in unison to become one superhero, Captain Thunder. In the later company-wide "New 52" reboot that followed Flashpoint, the Captain Marvel character was renamed "Shazam" and starred in a backup segment of the Justice League series (second volume) from 2012 to 2013. These backups, by writer Geoff Johns and artist Gary Frank, introduced Billy Batson/Shazam and his new Shazam Family, consisting of Billy and his five foster siblings, with whom he shares his powers. - Wikipedia 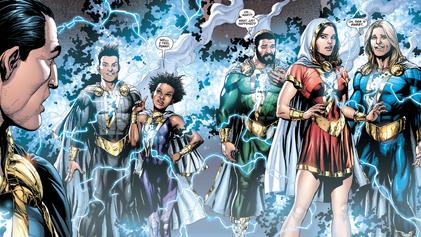 In comics, 6 was the max member of Marvel/Shazam family at a time.

And also not everything is seven, SHAZAM is 6 letter and he gets the power of 6 gods:

the wisdom of Solomon, granting increased intellect; the superhuman strength of Hercules, the superhuman stamina of Atlas; powers from Zeus, including the ability to summon lightning; the increased courage of Achilles, as well as being nearly indestructible; and the superhuman speed of Mercury, which provides him with the means of flight.

7
How did Billy become eligible to gain Shazam's powers?