What is the significance of “C-12” in In The Line Of Fire? 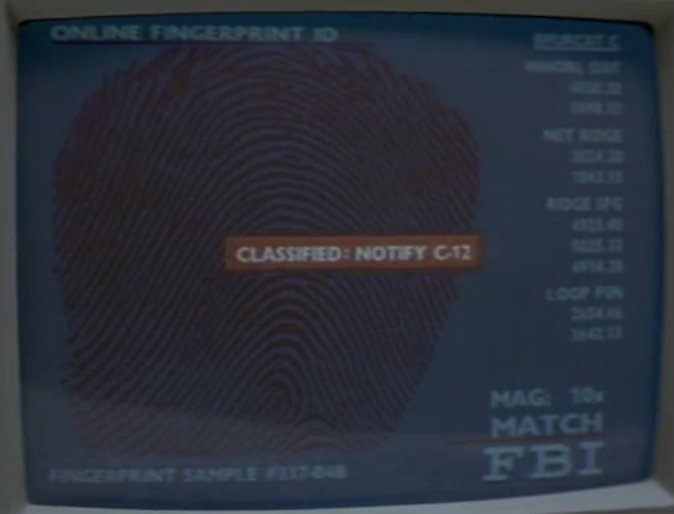 What is the meaning/significance of "C-12"?

I imagine it could be a reference to Majestic 12 (a bit far off unless you're willing to throw UFO conspiracy theories into the same pot as JFK conspiracy theories) or it could simply mean "Classified", "Confidential" or "CIA" followed by a cool-sounding number.

C-12 is an office or a person who should be notified when there is a hit on the prints.

The record is not "classified C-12," it is "classified" (meaning that disclosure of the record could cause harm to US national security) and the words "notify C-12" are a direction for anyone who finds this print at a crime scene to kick that fact up to "C-12". So C-12 is an office or a person--most likely an organizational code for a liaison office that will look up and contact the interested party should law enforcement find the prints somewhere. It would NOT indicate CIA because the CIA would not want their connection to the record to be so obvious to those without need to know. It would indicate a mundane bureaucratic office that could look up that it was CIA (or whomever) that should be notified and notify them.

So basically it means that the identity of the owner of the prints is classified and someone in the government wants to get an alert should this print turn up anywhere. A rogue agent is one such person who might logically have such instructions attached to his prints. Another would be a deep cover agent, especially one who has lost contact with his handlers. Note that "classified" is an adjective, not an official marking. In reality, the level of classification (Confidential, Secret, or Top Secret) would be given.

I was wondering the same thing. what I can add is, the "C", may also be for Clearance. When I did a search for it, I searched rank and interestingly enough the first result came up with Staff Sargent. I think the majestic 12 reference is a bit of a reach but the assassin does demonstrate commando or special services style of hand to hand combat techniques. This is another possibility for the "C".

The 12 could also be a relative number referring to a unit number. We can make an assumption that he is CIA as he also demonstrates an ability to be covert in his appearances with makeup and prosthetics. We can also deduce that he has a background in technical training and possibly electronics. He also works alone which means that he could be rogue element of the government or military specializing in assignations.

One more thing to consider is the remark he made to Frank, when Frank asked "Booth" who betrayed him. Mitch said, "some of the same people" Which may mean, that Mitch may also have been Secret Service. Which may also be an indicator as Mitch had more knowledge than that of the average conspiracy theorist in the Kennedy assassination.

In fact, halfway through the film they identify Mitch as a former CIA operative. A trained assassin and the agent refers to him as a C-12 matter. So, we could assume that C-12 is a code within the CIA for a former agent gone rogue.

Not the answer you're looking for? Browse other questions tagged in-the-line-of-fire .

3
Why do they also carry other guys' photos if they know Mitch Leary is the assassin?