Why are faces in pictures covered with stickers both in a Mr. Robot episode and a Billions episode?

This is a weird phenomenon I have seen in two different shows.

In the episode eps2.9_pyth0n-pt1.p7z of Mr. Robot, Angela is taken to a residential area, to some home to be interviewed by White Rose. As her two captors walk her through the home, there are many pictures hanging on the wall of a hallway. In every photograph, the faces have been covered by a sticky note or sticker or something. 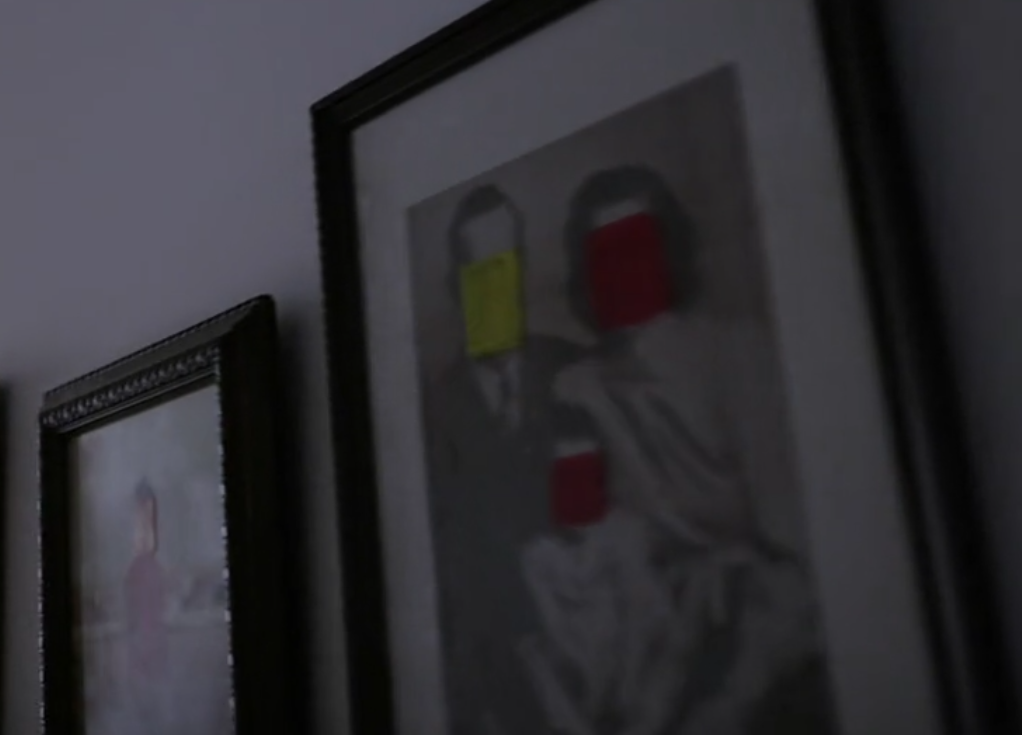 In the third season, tenth episode ("Redemption") of Billions, a conference room at Axe Capitol has a very similar situation. There are two large pictures on the wall. One has astronauts (or a sci-fi movie), the other has what looks like a black and white picture of men in suits. In both pictures, the faces have all been covered. 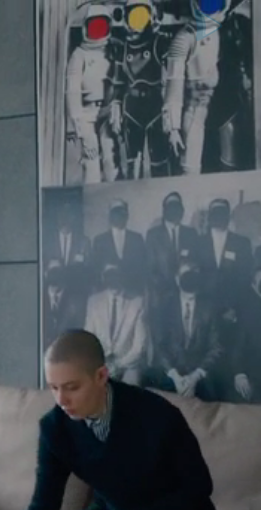 Is this some style of art or is there some other reason the faces are covered?

The second image - the picture from Billions - is a work of art by John Baldessari from 1988, called Astronauts and Businessmen.
Baldessari, besides being the "guy who puts dots over people's faces" (a well-known phrase from the artist himself), is also famous for juxtaposing words and images in his artworks, and often subverts or emphasizes the power of the image. 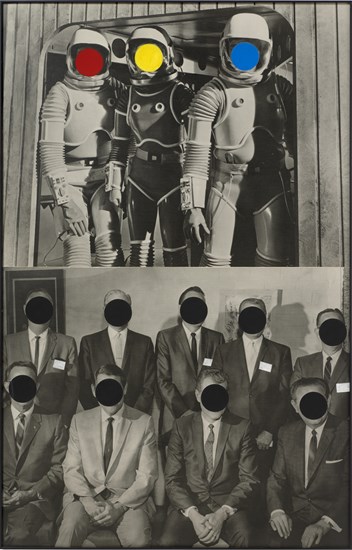 Describing his initial intuitive leap in this direction, Baldessari said, "I just had these price stickers I was using for something else, in some graphic way and I put them on all the faces and I just felt like it leveled the playing field."
Via Wikipedia, from HENRYandREL Supermarché, a short film about the artist, wonderfully narrated by mister Tom Waits

In the first image, from Mr. Robot, the photographs seem to be painted over with acrylic, on top of the glass. This could of course allude to Baldessari's work, but mind that he never covered up faces with squares or rectangles.
In any case, it's a form of censorship, and it evokes ideas of anonymity, identity, and the faceless mass - very suiting for a series about cybersecurity and hacktivism.
The house that Angela is led through to eventually meet with Whiterose, has all the appearance of a regular home. But there is something uncanny about it. Whether or not her captors are the real residents, there is no place for sentiment in this residence: someone's personal history has (literally) been defaced.

As for the apparent cross-reference between the series: we humans see patterns in anything; it's probably just coincidental.

Not the answer you're looking for? Browse other questions tagged mr-robot billions .

7
Why did Elliot return to fsociety in the third episode of Mr. Robot?
3
How do Elliot Alderson and Cisco communicate with dark army in Mr. Robot?
9
Who are the people in the opening sequence of Mr Robot episode 1 season 1?
6
Why is Mr. Robot so anti-Chinese and why is this so widely accepted?