When the Genie turned Aladdin into "Prince Ali", what exactly did that entail?

In the 1992 animated Aladdin movie, Aladdin's first wish is "I wish for you to make me a prince!" This seems to entail:

As this this comic (and part 2) parody, if that's all that Genie did, then he wasn't really made into a prince. 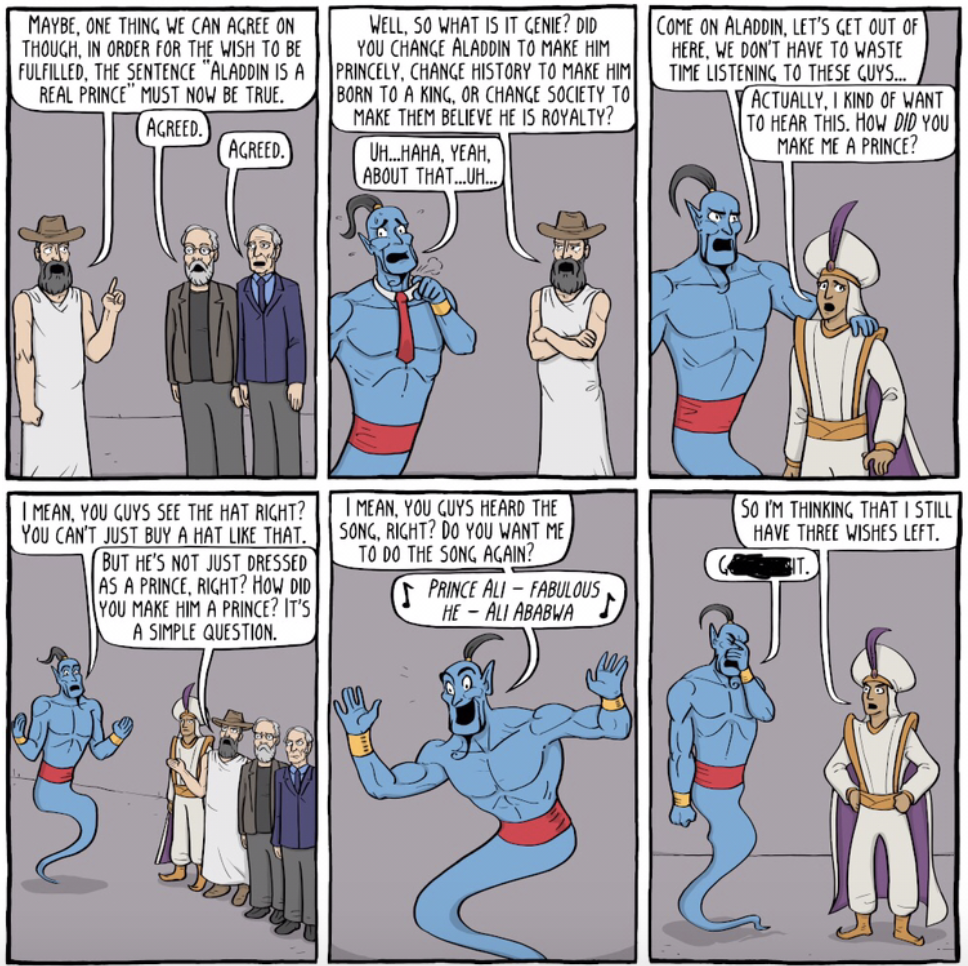 Is this interpretation accurate? When the Genie turned Aladdin into "Prince Ali", what exactly did that entail?

As far as the movie shows us, Aladdin only appears to be a prince and doesn't have an actual kingdom.

Keep in mind that Genie knew Aladdin's intentions of seducing a girl:

GENIE: Well, here's hopin'. (Shakes ALADDIN's hand.) O.K. Let's make some magic! (Turns into a magician.) So how 'bout it. What is it you want most?
ALADDIN: Well, there's this girl--
GENIE: Eehhh! (Like a buzzer, and GENIE's chest shows a heart with a cross through it.) Wrong! I can't make anybody fall in love, remember?
ALADDIN: Oh, but Genie. She's smart and fun and...
GENIE: Pretty?
ALADDIN: Beautiful. She's got these eyes that just...and this hair, wow...and her smile.
GENIE: (Sitting in a Parisian cafe with ABU and CARPET.) Ami. C'est l'amour.
ALADDIN: But she's the princess. To even have a chance, I'd have to be a--hey, can you make me a prince?
GENIE: Let's see here. (Has a "Royal Cookbook".) [..] Ah, to make a prince. (Looks slyly at ALADDIN.) Now is that an official wish? Say the words!
ALADDIN: Genie, I wish for you to make me a prince!

We can therefore assume that Genie only focused on making Aladdin a prince so that he could have a shot with Jasmine. Aladdin wasn't asking for a kingdom or riches. This supports the idea that Genie only changes Aladdin's appearance, which he also indirectly confirms a few lines later:

GENIE: He's got the outfit, he's got the elephant, but we're not through yet. Hang on to your turban, kid, cause we're gonna make you a star!

Notice how he only focuses on appearance. He doesn't mention the practicalities or legalities of being royalty. He's making Aladdin a star, i.e. a well known celebrity.

Pedantically, if you consider Genie to be omniscient, he didn't even need to make Aladdin a prince, since he already was one. In the third movie, Aladdin's father (Cassim) is revealed to be the King of Thieves, thus making Aladdin the Prince of Thieves (which actually suits Aladdin's street life pre-genie).

Also, there's no reason to believe that the parade disappeared. While Genie can conjure up many things, living conjurations tend to still look like him in some way; and none of the people in the parade look like him. It's equally possible that Genie conjured the money needed to hire people and buy the resources to have a genuine parade. We simply don't know what happens between Aladdin's wish and his arrival to Agrabah.

Aladdin wasn’t specifically changed into a prince, rather he was made princely.

The Genie only had to give him the riches and reputation. He only needed to be a prince of a place no-ones heard of.

Royal blood is only royal because someone rich enough and powerful enough decided to take control of a group of people willing to accept that person is in power. They kept that power within the family, by passing it down to their children, which was further accepted by said controlled people.

So the comics interpretation of the situation is right and wrong. Aladdin became powerful and rich and Royal, just of a place that doesn’t exist.

Not the answer you're looking for? Browse other questions tagged aladdin .

12
Why didn't Aladdin lend the lamp to Jasmine?
25
Does the Genie trick Aladdin with the third wish?
5
Why is Disney's Aladdin so poor despite company of the genie?
38
Did Genie actually grant any of Aladdin's wishes other than the one to set him free?