Who was the woman with Thorwald in Rear Window?

In a scene in "Rear Window", Thorwald is seen leaving his apartment with a woman in the morning, after he supposedly killed his wife and deposited her body parts in the night before. That scene was to convince that he left with his wife in the morning to see her off at the train station.

But there was no mention of that woman in the climax. Who was she?

As far as I know the woman [pictured] as an actress is never identified.

The woman as character is either the real Mrs. Emma Thorwald leaving or a fake Mrs. Thorwald used as a ruse by Lars Thorwald (in this way, she's a MacGuffin).

Given that this woman's appearance, from that distance, is almost identical to Mrs. Emma Thorwald (Irene Winston) it's quite possible it actually was Irene Winston in another outfit meant to hide her face, but set the seeds of doubt as to who it is in the audience (remembering Jeff is, at this point when we see it, asleep). However, I cannot back this up...

It is only by the end of the story, when Lars admits to the murder to Jeff before trying--and failing--to kill him, that we realise it was a fake Mrs. Thorwald.

In retrospect we know she is part of Thorwald's ruse.

However, she serves a more important purpose for us, the audience, in that Hitchcock is showing us something that Jeff (Stewart) is not seeing and thereby increasing the tension.

Hitchcock added this scene for two reasons. On the one hand, to separate us from Jeff's point of view and create a tension in the audience (e.g. "Was that Thorwald's wife?" leads us to believe Jeff is wrong versus "Was that a fake Mrs. Emma Thorwald?" Jeff is right, but we're still not sure--both = tension).

On the other hand, this scene is paralleled later in the film when Jeff is looking away talking to Stella and we, the audience, see Thorwald in the process of coming over to 'visit' Jeff.

Hitchcock was a master of setting scenes up like this. This second, parallel, Jeff-misses-something-important scene is something Hitchcock called "taking the curse off"-- we already know Jeff has missed something from the earlier fake Mrs. Thorwald scene, so now when Jeff misses Lars Thorwald leaving the audience is not definitively seeing the menace in this, thus raising the bar for when Lars shows up in Jeff's apartment. 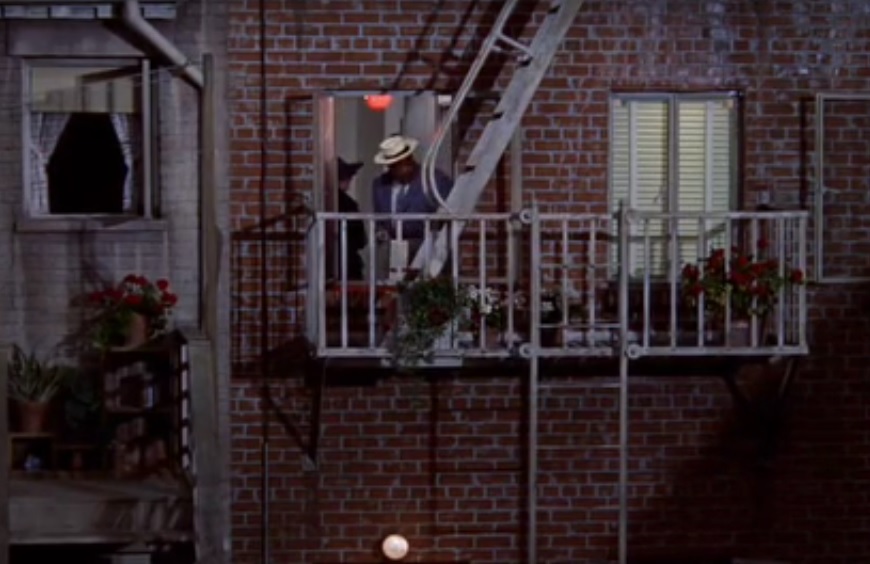 Not the answer you're looking for? Browse other questions tagged plot-explanation rear-window .

16
Why the annoying woman with the kid in the train station?
7
Is Dogville inspired from Hitchcock's Rear Window?
10
Was Rear Window making a statement about 1950s gender roles?
7
What is in the box in Rear Window?
2
Why didn't Lisa tell the truth about Thorwald to the police?
3
Why don't Jeff and Stella rush in to save Lisa?
12
Why was Evey out past curfew in the first place?
3
Did the Predator think Cantrell was not a threat
8
Confusion about the ending of 'Stree'