Why didn't Life use sound to capture the Venom symbiote?

Fairly early in the Venom film, the Life researchers discovered that sound of a certain frequency disabled the symbiotes.

However, they fruitlessly sent agents, cars, dune buggies, and explosive drones to try and capture Venom.

Why did they do this when a loudspeaker would have been so much more effective?

Two answers to this as usual

Why does someone who's being hunted by a killer always have bad/no phone signal and usually a dead battery... because modern technology is so powerful a tool being able to be used anywhere anytime and get help/support within minutes usually needs to be rendered useless otherwise you can't have the drama required for the film.

Same principle here, the sound waves mean you can't have motorcycle chases while being bombed by drones which lets be honest looks a lot cooler than "quick point this speaker at him!"

Carlton Drake from the life foundation knew about it but they also knew that it hurts the symbiotes quite extensively, so and he makes it very clear he treasures the symbiote more than humans by that stage... he would obviously prefer not to damage venom while bringing him in, and again he doesn't seem to care about a few human employees getting hurt in the process.

This may have been something the directors overlooked, it is considered one of Venom's plot-holes.

The Life Foundation knew a lot about symbiotes. So, why didn’t they create a weapon to stop or stun the alien creatures? When Carlton Drake’s henchmen went after Eddie Brock in his apartment, they didn’t seem to know anything about symbiotes or what Venom was capable of doing.

However, they did know that symbiotes don’t like sounds over 600Hz. So, why didn’t anyone think to bring some music to stun Venom and get the symbiote back to the lab? It would’ve saved them a lot of headache and evil henchmen.
- 25 Things That Make No Sense About The Venom Movie - ScreenRant

We do know that other groups have used sonic attacks against Venom.

The Venom symbiote has two major weaknesses - sound and fire. Loud noises cause the symbiote to writhe in pain. That's how Peter Parker originally freed himself of the symbiote. A tolling church bell drove the two apart and sent the fleeing symbiote straight into the arms of an unsuspecting Eddie Brock. Even now, sonic weapons tend to be the first line of defense against Venom and his fellow symbiotes.
- HOW TO KILL VENOM - IGN

So, to disagree with the other answer I believe that a sonic battle could have made quite a cool scene. 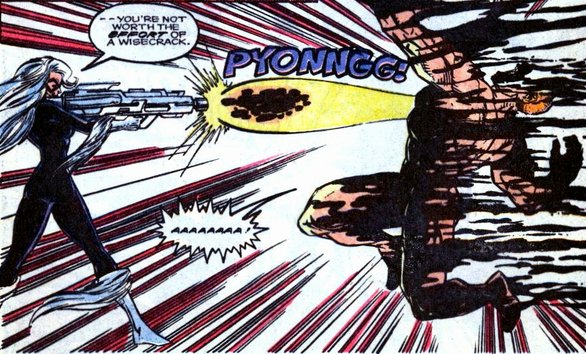 So, in conclusion I believe that the producers somehow overlooked this part of the movie .

Like with almost all movies, the enemy won't just harm the character. If this were to happen it would lose:

Who wants to watch a movie abut a character that instantly is attacked and beaten, failing the whole plan throughout the movie. Not to mention that the Life Foundation cared about the symbiotes and barely understood their complete capabilities. It my also be forgotten to come across or finsih their plans. This means that Venom didn't have to worry as much as if he were attacked with sound or fire.

30
Does the upcoming film with Venom take place in the Marvel Cinematic Universe?
6
Why was Carnage edited out of Venom?
7
What happened to the other symbiotes in Venom?
4
What is the name of the other symbiotes in Venom?
4
How does Venom survive the blast from the rocket?
3
Is Venom a villain in the movie with Tom Hardy?
42
Why didn't Loki use the Tesseract?
5
Why did Venom only eat heads?
1
Why didn't the Witch kill or capture the Emperor already?