Where are Wolverine's underpants?

In X-Men Origins: Wolverine, when Wolverine was getting infused with Adamantium in the Weapon X facility, the following still from the film reveals that he was strapped-on at the floor of the chamber, wearing black underpants.

(Please correct me if you think I am getting this wrong, but I think those appear to underpants and not straps. Notice the curvature of the straps around the crotch area, as opposed to the straightness of the chest strap. Also, the needles were clearly periodically arranged on the sides, so there was no reason for Wolverine to not be wearing anything in the pelvic region.)

Yet, a few seconds later, when Wolverine breaks free from the chamber, he emerges wearing his birthday suit (at 1:36 or 1:37 in the linked video). In fact, after breaking free, there is also a shot where he streaks across the field of an old couple.

So, where did Wolverine lose those underpants? Or were those merely some straps?

Checking from other angles, it's definitely a strap. 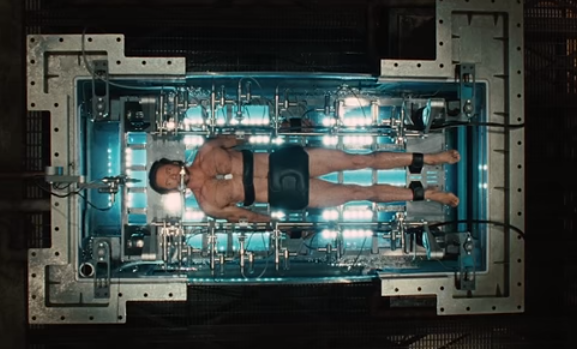 If you zoom in you can even see clasps of strap in second snapshot.