What's the meaning of the sentence on Ariel's shirt?

In Ralph Breaks The Internet, in one scene, Ariel wears the t-shirt pictured below.

Being not native speaker I'm having an hard time understanding its meaning. 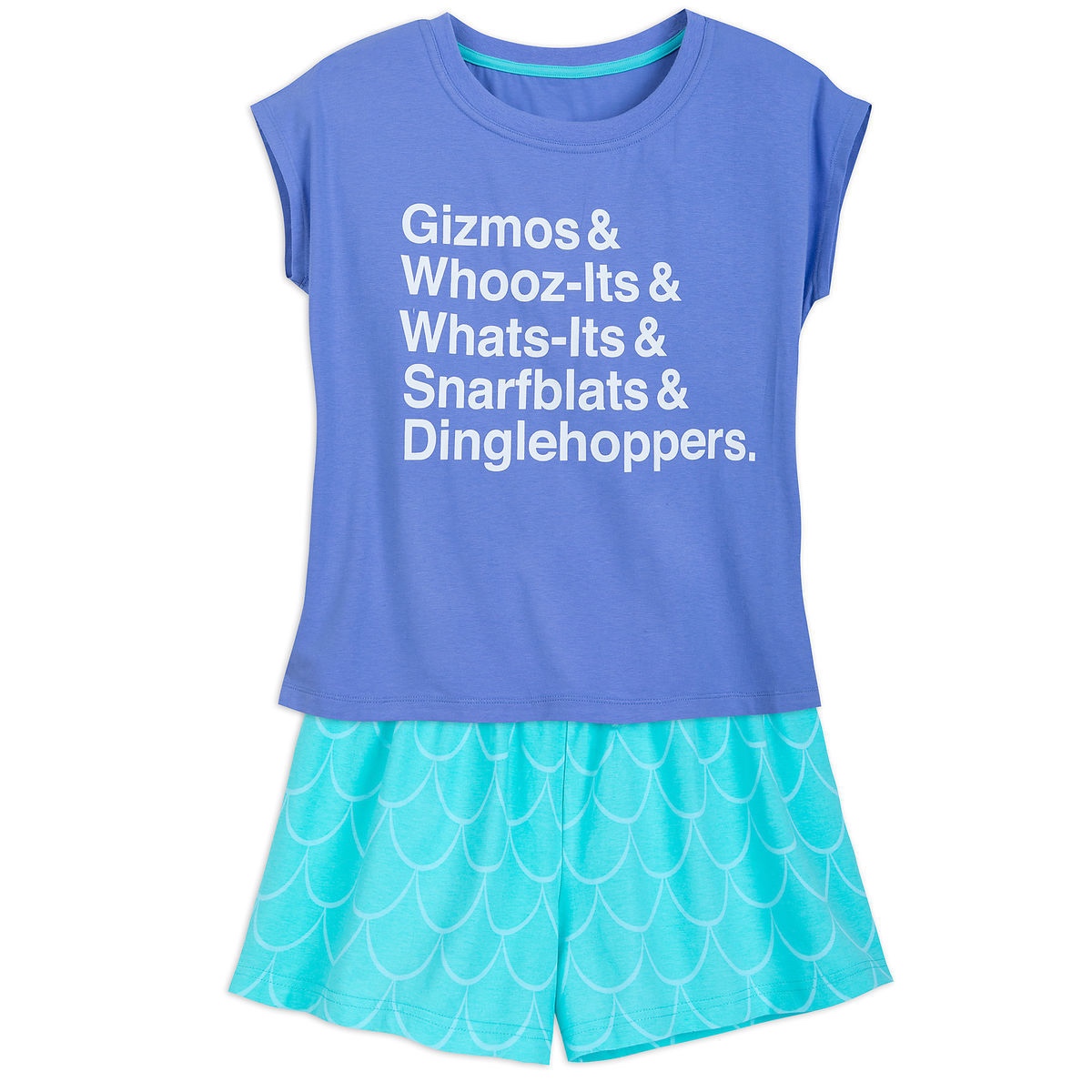 These are references to Ariel's treasures in The Little Mermaid.

Ariel has collected many things, each representing a special memory, adventure or a new discovery. She calls them her gadgets, gizmos, whosits, whatsits, and thingamabobs.

The Dinglehopper (a.k.a. the fork) is an artifact from the sunken ship which Ariel and Flounder explore early in The Little Mermaid. It is in fact a fairly ordinary object, but Ariel prizes the dinglehopper, as it is an artifact of the human world.

The Snarfblatt was a smoking pipe but Ariel was told....

Scuttle: This, I haven't seen this in years. This is wonderful! A banded, bulbous snarfblatt.

Scuttle: Now, the snarfblatt dates back to prehistorical times when humans used to sit around and stare at each other all day. Got very boring. So they invented this snarfblatt to make fine music. Allow me. [blows into it, only to have seaweed and water come out]

The shirt is a play on a design meme popular a few years ago, where related words or names are listed in Helvetica font with ampersands in between them, and a period after the last one. (The meme originated with a Beatles T-Shirt designed by a Dutch company.)

The words on Ariel's shirt all come from The Little Mermaid movie. Ariel likes to collect human artifacts. She calls them her treasures, but doesn't know what they are. She believes her seagull friend Scuttle knows all about humans (he doesn't, of course), and asks him the name and purpose of the things she finds. Since he doesn't actually know any more about humans than she does, the names he gives are nonsense words (dinglehopper, snarfblat) or words used as placeholders when you don't know what something is called (gizmo, whooz-it, whats-it, thingamabob).

I've got gadgets and gizmos a-plenty
I've got whoozits and whatzits galore
You want thingamabobs? I've got twenty!
"Part of Your World" lyrics

(From watching that song a few times, I've determined that a gizmo is a pocket watch, and thingamabobs are corkscrews. I can't figure out what object she's holding when she says "gadget" - it's something diamond-shaped at the end of a string. She sings "whoozits" and "whatsits" off-screen, but it's possible one or the other of them is used for eyeglasses, since that's what's shown when she sings those words.)

Scuttle also tells Ariel utter nonsense about what the items are used for. For example, when Ariel shows him a fork, he says,

It's a dinglehopper. Humans use these little babies to straighten their hair out. See? Just a little twirl here and a yank there and voila. You've got an aesthetically pleasing configuration of hair that humans go nuts over. IMDB

Similarly, about a smoking pipe:

Scuttle: I haven't seen this in years, this is wonderful!
Ariel: What is it?
Scuttle: A banded, bulbous snarfblatt.
Ariel, Flounder: Oh.
Scuttle: You see the snarfblatt dates back to pre-hysterical times when humans would sit around and stare at each other all day.
[long pause]
Scuttle: got very boring. So they invented this snarfblatt to make fine music, allow me!
IMDB

Not the answer you're looking for? Browse other questions tagged reference ralph-breaks-the-internet .