Would the Post Office really deliver a letter decades after postage like in Back To The Future?

Not that it ruins my enjoyment of the movie, but I'm curious about the scene in BTTF2, where a postman shows up in 1955 where the Doc had been blasted back to 1885 and gives Marty a letter that the Doc had posted 70 years earlier.

Would the Post Office would really agree to this? It seems like a very strange request - i.e. "Deliver this letter in 70 years to this location" which is not even an address, just somewhere on the side of the road which we can only assume exists in some form in 1885. It also seems logistically difficult, they'd have to keep the letter in a file somewhere through several generations of staff and still be sure that it was delivered at the appointed date. Do they have a system to do this kind of thing?

(The postman doesn't seem too surprised - he laughs it off, basically just saying he'd lost a bet.)

The package wasn't delivered by the United States Postal Service, it was delivered by Western Union, a private company. Speaking as a former postal employee, I would expect the US Postal Service to lose the letter sometime in that 70 years. They may eventually find it... but find it and deliver it on time? Not likely.

As a private company, Western Union is more likely, willing, and able to deal with special/odd requests. They have more of a reputation to consider (the USPS is the government, and doesn't have to care, citizen). Furthermore, the package never actually left Hill Valley. While 70 years seems like a long time, it's entirely possible there only around half a dozen people (maybe even less) involved in caring for it. As indicated by the delivery man, whether or not Marty would be present became a running bet/joke at the office - people became emotionally invested in the mystery.

Judging by the time it needed to travel from one place to another (especially in the US or Canada) there is no reason not to.
For example, This picture show how long it would take to travel from New York to different places 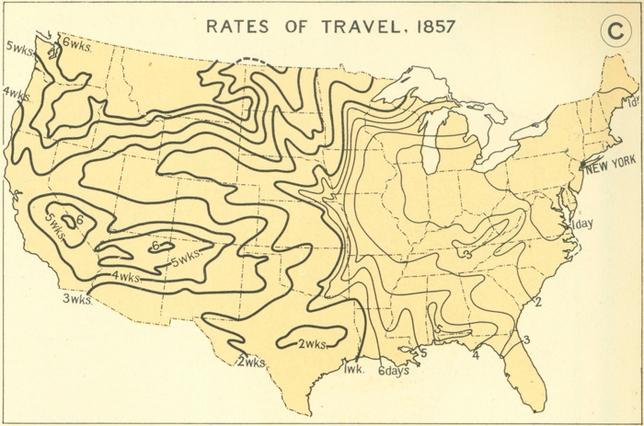 So sending out a "happy birthday" card to California had to be done at least month earlier. But to not overshoot it would be reasonable to send it month prior but with delivery date set to particular day.

Card with "delivery date" set 70 years into the future would be held as a local curiosity in Postal Office (and I assume) as a proof of trust put into Postal Service.