How is Itomori's demise related to its lake's creation?

During the course of Your Name. (orig.: Kimi no na wa.) we learn that in Mitsuha's time her home town Itomori is about to be hit by a splintering comet. When Taki in Mitsuha's body is going to save the town together with her friends, they mention the fact that the region was already hit by a meteorite a thousand years ago, which actually created the lake that Itomori is built around (transcribed by me from the German translation):

Sayaka: But, it's improbable that it happens, right?

Tessie: No, not necessarily! Do you even know how the Itomori lake was formed? By a meteorite crash, thousand years ago there already landed one here. 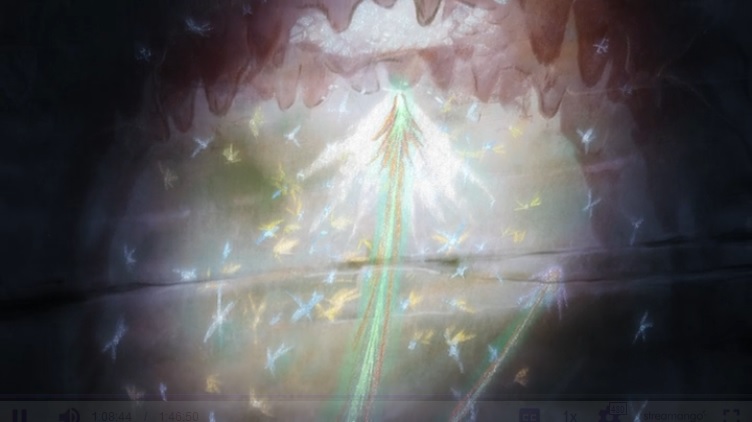 Mitsuha (Taki): I understand, that's why!

When hearing that, Mitsuha/Taki remembers what I think to be a painting of the comet in the shinto cave where he drank Mitsuha's sake. He seems to have a realization of some kind, but it's unclear to me what he "understands". It might be just the realization of why there was a painting of the coment at the shrine, but even then, it's still quite a coincidence that the Itomori region is hit by a meteorite twice (and albeit not at the exact same place, then at least quite closely, close enough for both craters to merge into a bigger lake after the impact).

So, is there any further connection between the meteorite impact a thousand years ago and the one in 2013 that Mitsuha and Taki try to save the town from? Is it even related to the whole body switching, too (earlier Taki/Mitsuha suggests that the body switch "dreams" could be there to warn/prepare them for the meteorite hit)?

The movie does not combine the two events. They remain unrelated even though improbable. 1000 years ago there was a comet that caused the beautiful late to form. There is another comet headed their way. Let's just say there is something special about this town. The women in Mithuha's family have experienced switches too. The grandmother talks about this, so it's not just Mitsuha and therefore not a warning for the comet. But because others never exchanged anything physically with their switching partners, the memories faded away like it was a dream - the grandmother mentions this too.

Even for Taki and Mitsuha, the same would have happened, but she travels to Tokyo and hands him that read thread which binds them with more strength. So the effects of the switching stay as memories for longer. Taki finds himself at the shrine because of this distant memory. Inside the shrine, he finds the kuchikamizake that Mitsuha made 3 years ago, just before the comet struck. As explained in the film, she uses her saliva for this which means this offering is one part of her.

Taki drinks this kuchikamizake and it re-establishes his connection to Mitsuha. He also witnesses time through the years. He sees the comet that struck 1000 years ago, he sees the town of Itomori, the whole life of Mitsuha Her birth, her mother, her father, her grandmother, her switching, her trip to Tokyo to meet Taki, Taki receiving the red thread on the train, the next comet, her death.

Boom! he's back in Mitsuha's body and thus is in the cusp of giving birth to a brand new timeline. A timeline where the town gets evacuated and Mitsuha doesn't die - and together they make it happen.

So in summary here's the answer to the questions raised:

1) but it's unclear to me what he "understands".

Taki doesn't understand, he recollects. He does a quick trip back in time and reconnects with the events of his switching with Mitsuha. Additionally, he has a quick glimpse of the history of Itomori through time.

2) is there any further connection between the meteorite impact a thousand years ago and the one in 2013 that Mitsuha and Taki try to save the town from?

No, there is no connection. It's like lightning striking at the same place twice.

3) Is it even related to the whole body switching, too (earlier Taki/Mitsuha suggests that the body switch "dreams" could be there to warn/prepare them for the meteorite hit)?

It is not related to the body switching because a couple of decades back the grandmother, too, faced body switching and that had nothing to do with a comet.

Not the answer you're looking for? Browse other questions tagged plot-explanation your-name .

19
How is the opening quote from movie Apocalypto related to the movie?
3
How is George Stark related to the twin?
9
How can the A.I. robot charge its battery?
6
How is Father James related to Jesus Christ in the movie “Calvary” (2014)?
0
How is Noele's reply related to Craig's question?
1
How Geiger Murder and Sean Reagan Murder related to each other?
6
How was Devil able to hit Sister Charlotte in Annabelle: Creation?
0
How are Madam Vice President and Philly Falzone's agendas related in Prison Break?
5
How is the bad guy's car moving backwards while its occupants are not?