What changes were done with Sailor Moon to make it heteronormative?

I have a blurred memory of watching Sailor Moon, American dub version, and had no memory of any homosexual story arc or characters. Recently I learned it was considered one of the only strong positive homosexual representations and had characters with lesbian and gay couples in prominent roles.

While researching I learned the American version censored it a lot to remove any sign of homosexual themes. How is that achieved when the main characters were also gay and lesbian? What were all the changes done to achieve this?

Also the American version edited the two-part finale of the first season heavily to remove any violence which resulted into one single episode. They also didn't release Sailor Stars, Sailor Moon Stars, the fifth season of the original show. Besides this, there were heavy name changes to make it Americanized.

From The Gamer (emphasis mine),

In the original Japanese anime and manga series, Sailor Uranus and Sailor Neptune were always open about their lesbian relationship. Their romantic involvement is well-known to most anime fans. Though they both flirted with the other characters or men, at the end of the day, they love each other the most. They even go so far as to become parents to Sailor Saturn, calling themselves "papa" and "mama."

American censors changed the famous LBGT couple from being lesbians to straight. When speaking of first kisses, they both mention men. Michelle mentions kissing a boy named Brad in Junior High school, but during the flashback, it's a shadowy figure of Amara. Their relationship was changed from a lesbian couple to close cousins in the American localization.

The story line featured 3 Sailor Soldiers from outerspace, The Sailor Starlights, posing as male Pop Stars. They are looking to stop another Sailor senshi/soldier, Sailor Galaxia from becoming the most power senshi in the galaxy by steeling human's of Earth's star seeds. When they transformed into sailor soldiers, they transform from men into women and one of the characters, Seiya had a massive crush on Usagi (Sailor Moon), as Mamoru (Tuxedo Mask) is absent for part of the story line... 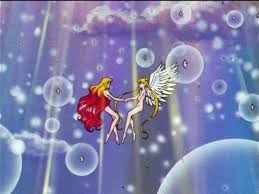 This series was not dubbed during the original run of the English dub because around the mid-2000s, the license for this season was cut off by Toei Animation from being distributed anywhere outside Japan; a common misconception was that it was because of the genderbending nature of the Sailor Starlights, which wouldn't get past American censors due to possibly promoting transgender and homosexual themes.

Although it's been sited this exclusion was do to Toei Animation licensing issue, there are many who argue it was also for other reasons, such as the genderbending aspects, more violent then previous series, and whose former religious undertones become more overt and materialize, as Sailor Moon gains "wings" and becomes The Messiah.

The argument seems valid to me, given the way Viz handled the former source material.

Not the answer you're looking for? Browse other questions tagged censorship sailor-moon .