So in that movie, when Bruce Wayne makes his public appearance at the charity ball, when he gets out of his car, cameras start flashing and he has something in his hands. He presses a button that renders all cameras useless. What is that device and how does it work? Is it like a mini EM pulse? But that would affect all electronics in its range. In the movie, it is implied that everything else like other bulbs/lights work fine. It's only the cameras that don't work all of a sudden.

And is it on his motorcycle too? Because the cops complain about the lights when he's in the tunnel, and the lights seem to be going with him. As he moves away the lights come back on.

There are many devices already on the market that can disable digital cameras via a laser. The laser over loads the digital sensor (either temporarily or permanently) and it's no longer able to take pictures.

There are several over the counter laser devices that are strong enough to do this. Including cheap pointers used by teachers on white boards. A direct hit to the camera's lens will disable it.

I found an article on the subject. Camera Zapper

In the film Tron Legacy the character Sam Flynn disables a security camera in a hallway using a hand held laser.

Can It Be Automated?

There already exists automated systems that can discover cameras via a flash feedback. The device uses an IR flash and any cameras pointed in it's direction will reflect back the flash. The system can then target the camera and strike the sensor with a powerful laser burst to disable it.

This has already been used by rich people to protect their privacy. Yacht Comes Equipped With Laser-Powered Anti-Paparazzi Shield

No I don't think so. He uses a small tiny hand held device to disable multiple cameras in one shot. In addition, the cameras appear to also be without power. A laser would only disable the sensor and only temporarily.

Still, the technology is based upon things in the real world.

Well In the motorcycyle chase he used an EMP gun.

When used, Batman can take down enemies or operate electrical equipment from a distance when shot at. We don’t know of any sight more intimidating than that of Batman staring you down while brandishing a gigantic electrical rifle. Here is a photo of the gun. 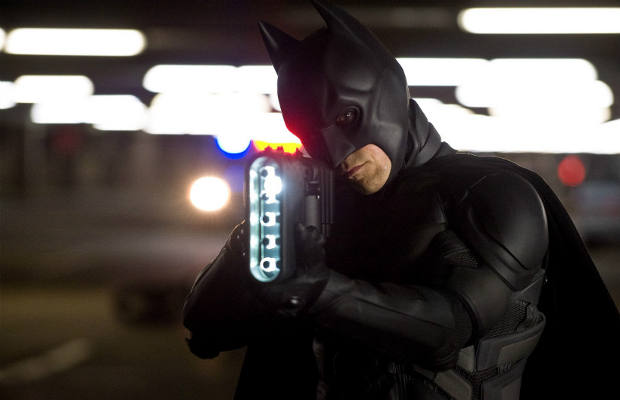 EDIT- Further surfing revealed it is the same thing which is capable of turning off the cameras also.

The EMP rifle releases an elctromagnetic pulse which is capable of disabling any electronics within a given range. This includes camera feeds, security systems, cell transmissions, electric vehicles, and anything else Batman might wish to disable.

So like you guessed, it might be a miniature of the EMP gun which he used to shut the cameras. Also the EMP guns can be pointed to stuffs very sharply, we have seen that in the motorcycle chase. So if there is a mini-EMP it is more easy to point it to a smaller area with cameras only.

The film's script and novelisation are both in agreement that it's some form of EMP pulse gun (albeit a small, portable version).

PAPARAZZI: Another stiff too old to climb out of his sports car.

PAPARAZZI 2: No, that’s Bruce Wayne! Hey, Wayne, where you been hiding?!

Lenses swing onto Wayne, who pushes a button on his key fob – a pulse. The cameras die. Wayne heads to the door. The Dark Knight Trilogy: The Complete Screenplays

Notably, he uses the same technology later on. It's also described as a 'pulse'

Batman put a safe distance between themselves and Selina’s attackers before landing the Bat on the empty helipad of a midtown skyscraper. An EMP pulse took out any inconvenient lights and security cameras, ensuring their privacy for the moment. - The Dark Knight Rises- The Official Movie Novelization

As mentioned in the other answers, it's a handwaved held EMP gun. The part I found most implausible were the self-restarting florescent lights in the tunnel, but apparently manufactures do produce automatically restarting ballasts with "Over temperature Shutdown/Thermal Protection" which will restart once "it has cooled down sufficiently."

This manufacturer's do not automatically restart from Transient Voltage or Arcing incidents (which is the fault condition you're likely to get from an EMP) and, "As with Poor Electrical Connection Shutdown, the ballast will remain in shutdown mode until it is reset by cycling the input power Off for a few moments, then back On."

But out of all the things to handwave, blurring the line of how the lighting scheme's safety features work isn't really the one to get hung up on.