What is the inspiration for Ducky Momo?

After going through the question about Mr.Slushy Burger and “Hey Ferb” song? from Phineas and Ferb I realized the show is full of so many out of universe references. And one of the major recurring part of the show was Ducky Momo: 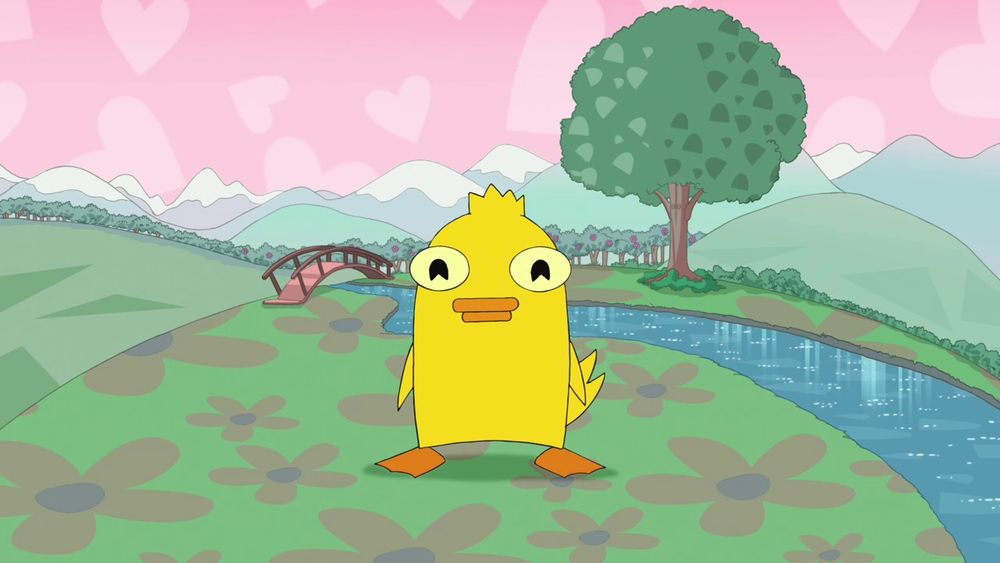 Does Ducky Momo have any inspiration from out of universe existing materials?

Disney Wikia gives a statement what was the inspiration for designing Ducky Momo character. From Ducky Momo

Ducky Momo was directly inspired by writer Jon Colton Barry's younger sister, Kristin, who looks very cartoony/anime-like. She has extremely giant eyes and big, pouty, lips that give her a "duckfaced" appearance. In gradeschool children would often tease her and call her "fish-face" and "duck-face". She was also the inspiration behind the character "Meap", which is one of her nicknames and an inside joke between her and Barry.

This doesn't give citations but the creator of Ducky Momo, Jon Colton Barry replied to a tweet who he created that character. The tweet asks the same question.

@mmonogram @joncoltonbarry I found an assertion that Ducky Momo from Phineas and Ferb is inspired from your younger sister Kristin. Is it true? Do you have a younger sister? If not, what was inspiration for the character?

It's true. My sister looks a bit like Drew Barrymore and I designed Ducky Momo as a caricature of her facial features. The "Momo" name was inspired by something my friend Alicia accidentally said, which was "momo." To this day, no one knows why she said this.

Jon Colton Barry once again clarified on Twitter as a reply to Dan Povenmire:

Ducky Momo as a concept was not inspired by any specific other character/show, just sort of stylized Japanese animation in general. I designed his face as a caricature of my sister, who looks a bit like Drew Barrymore. His name came from something my friend Alicia said.

So, the inspiration of this character is not any other show but Japanese stylized animation in general but he drew Ducky Momo based on his sister's caricatures. His (Yes, Ducky Momo is a male) name came from Jon's friend Alicia's suggestion.

No specific basis, but Japanese animation in general.

I tweeted at Dan Povenmire and Swampy Marsh, asking if there was any specific inspiration:

@tombquestwiki: Hey @DanPovenmire and @mmonogram - is there any specific inspiration for everybody's favorite duck, Ducky Momo? I see a lot of speculation, but nothing official, and it'd be nice to know and not just speculate ;)

@DanPovenmire: Nothing specific, just Japanese kid animation in general. It really came from a funny drawing by Jon or Piero if I remember correctly.

Speculation around the internet is that it may have come from Magical Princess Minky Momo, a Japanese cartoon. The "Momo" connection is obvious, and there's also an orange bird that features in the cartoon (called Pipil).

Not the answer you're looking for? Browse other questions tagged character reference phineas-and-ferb .

5
What are all the references in the "Hey Ferb" song?
8
Is Slushy Burger a reference to any restaurant chain?

4
What was the impetus behind making Steve Austin "better than before"?
12
What was the inspiration for the trampoline storyline in "Aerodynamics of Gender"?
8
Inspiration for the Newsroom?
9
How aware are the Phineas and Ferb characters that they're in a TV show?
5
What are all the references in the "Hey Ferb" song?
3
Is the metronome device in The Sinner Season 2 related to the song in Season 1?
1
Musical references in JoJo's Bizarre Adventure
13
What is Ferb's name short for?
8
Why is the "Rocky" franchise particularly lampooned for its many sequels?