Are there live-action filming restrictions that prevent the Netflix Marvel Universe characters from appearing in Disney+ shows?

Now, Daredevil has been canceled shortly after releasing its third season, which got me thinking:

Will this be the last we'll see of these characters? Can Disney redistribute and continue their series in its own upcoming streaming service? (at least as portrayed by these actors)

Asked another way, are there restrictions to these characters' live-action filming rights as negotiated by Netflix that would prevent Disney from picking up where these stories left off?

Jessica Jones and Punisher may still have a season to air on Netflix but may soon find themselves in the same boat.

Despite no mentions in the MCU movies about any character in the Defenders group, there were scattered mentions of MCU events and characters in these shows. Does this hint at the possibility of "compatibility" between these universes? I only mention this as there are already shows slated for Disney+ based on MCU characters.

Although Disney nor Netflix has yet to tell us what's really going on and until then, we may only be able to speculate, there is some evidence to at least support that Bob Iger is extremely interested in investing in Disney's upcoming streaming service, Disney+ and that many franchise spin-offs will be made for this platform. In addition, Iger mentions eventually "bringing older content over" to the new platform...

You call it upheaval, I guess that's one way to describe it. I believe we have to look at this as opportunity versus threat. Meaning I've tried to manage this company … in a way that enables us to not only survive but to thrive in a world that doesn't look anything like the world that existed just a few years ago.

There are three ways to do that. The first is make great content. And this is very relevant to the Fox acquisition. The second is to be incredibly innovative about how you bring that content to market. By the way, there isn't a better example than Netflix. The third is to be truly global in nature.

No. First of all, I don't know what Netflix is spending. You may know more than I do. If you really look across all of our businesses and you include ESPN and ABC and ABC News and what we're buying with Fox, we probably spend upwards of what they're spending. It's just that we're distributing differently. So the pivot for us is not necessarily substantially more spending, it's substantially different distribution. But while we're migrating to new distribution models, we have to spend enough [to populate] the new distribution until we can move content on the older ones over.

So far there are spin-offs in the works for various franchises:

UPDATE VIA Deadline (About Daredevil):

A statement this morning from the home of The Avengers and Spider-man used similar language to what the streamer signed off with to indicate that Hell’s Kitchen’s blind protector isn’t done yet on the small or even big screen. “We look forward to more adventures with the Man without Fear in the future,” the Disney-owned comic giant said Friday.

That’s a lot like “While the series on Netflix has ended, the three existing seasons will remain on the service for years to come, while the Daredevil character will live on in future projects for Marvel,” which the streamer said Thursday when it announced Season 3 would be its last for Netflix.

Second UPDATE - Netflix Marvel shows *may end up on Disney+

What's the right mix of original and licensed programming on Disney+?

Many of our core brands are going to be in that service. Some of this content will have an initial window, like a theatrically released film, some will be on television first, some will be original for the service. It will skew naturally from an hours perspective, because of how much we've invested over the years, toward product that's non-original, but we're making a lot of original content.

Would you consider reviving the Marvel shows that Netflix canceled?

They are very high-quality shows. We haven't yet discussed that, but I would say that's a possibility.

So it seems like they are moving some of this property to either feature films or their streaming service. But it still remains unclear if the character(s) will be recast...

I greatly appreciate Darth Locke's answer and will keep it as an accepted answer to this question.

However, for completion's sake, I do want to add an infographic recently released by the Geek Twins on this very topic: 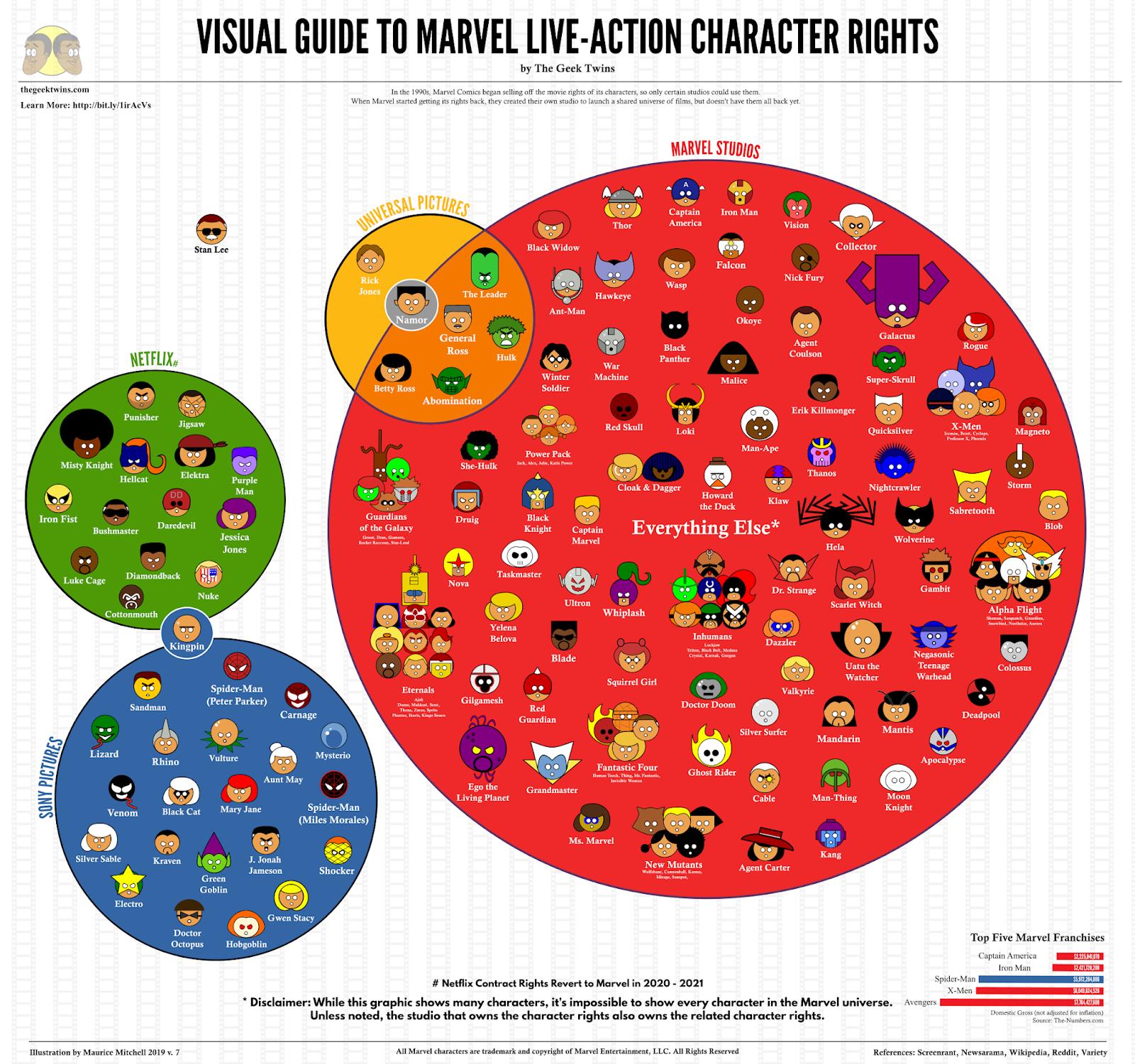 Specifically of interest to this question is a footnote which reads.

I'd have to follow up on their sources to see specifics but will otherwise point to another issue. Just because Marvel has certain rights doesn't mean they will exercise them. Case in point, now that the Fox merger has completed, there is no announced plan at this time to include any of the X-Men or Fantastic Four characters in the MCU as far as I'm aware so, still, take with a grain of salt.