In the movie "Hugo", what are these Pictures supposed to mean?

In Martin Scorsese's "Hugo", when the Station Inspector has locked up an orphan urchin inside a little prison inside his office and he is talking to the police to come and pick him up and take him to an orphanage, we (the audience) are shown this wall which shows photos of children with red crosses. 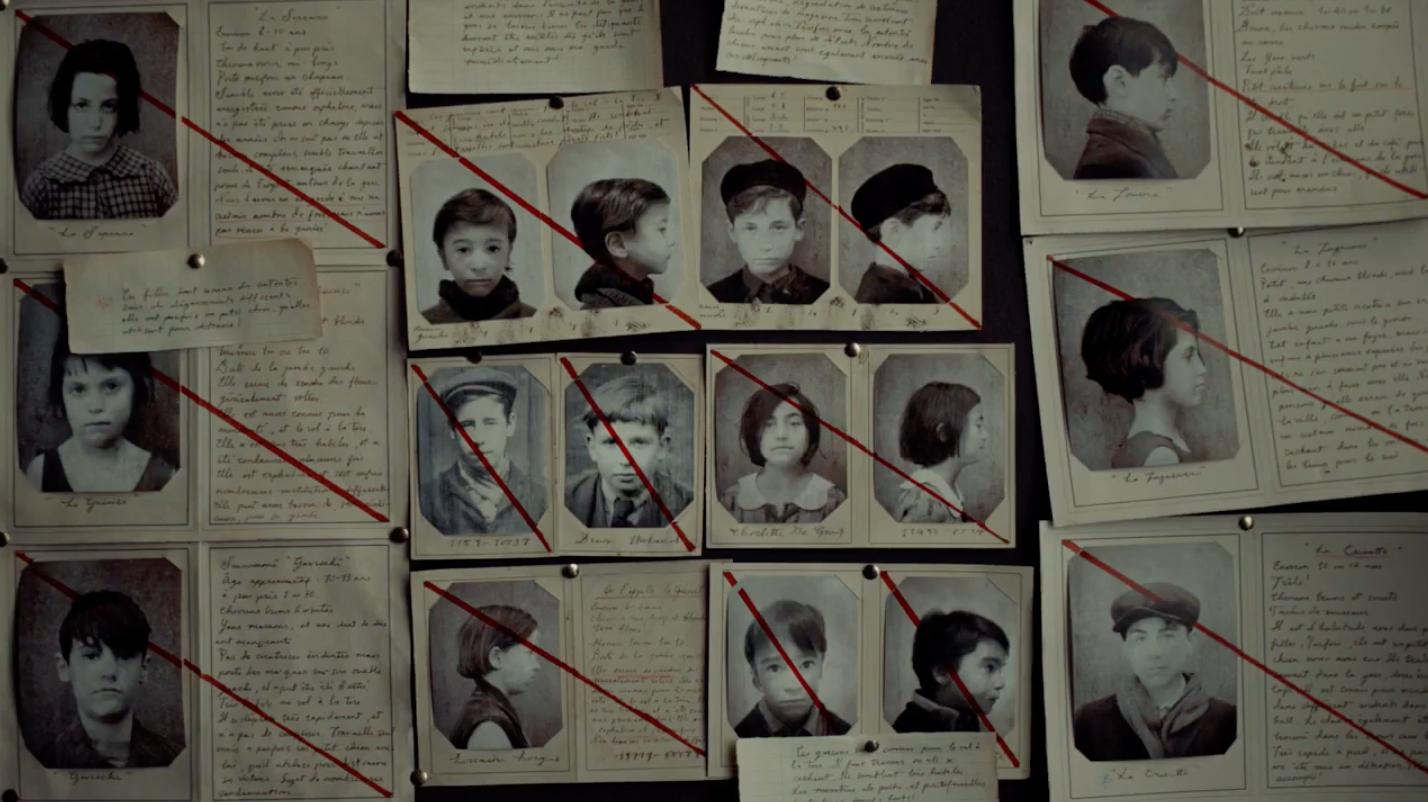 What is it supposed to mean?

I think it's the photos of all the children he has caught stealing at the station and whom he has successfully handed over to the orphanage. That's the only thing that makes sense, being present in the room, that he puts the children in those cages and all.

As stated in the movie itself, every character has their purpose in life that they are magically drawn to:

And the station inspectors purpose is being a guard dog. This is emphasized by giving him the guard dog Maximilian as a companion and having him behave, move and look (head shape) in a similar fashion throughout the movie.

The guard dog is always on duty (even when in the bath tub) and does not question its task. Sometimes a guard dog strives so much in its task that it overextends on it.

The task of the station inspector is keeping the station clean and safe. He already did a splendid job as there are no accidents or criminal activities (apart from the 2 urchins) on screen for the entire movie. So having achieved that task, he will not rest but instead try to overachieve it by making it super-clean and super-safe.

To achieve that he tries to find any excuse to pick up pesky orphans and send them to the orphanage.

To track his process, similar to dogs storing bones in the earth, the station inspector has created a gallery with his achievements. Every orphan that he has ever encountered is meticulously documented and emotionless scratched off his list once apprehended.

The same fate awaits Hugo (even though i did not notice his face on the gallery), because he fits the pattern: Orphan

For some reason he even fit the pattern, while his uncle was still taking care of him. Which to me is another sign of the station inspector trying to over-perform his task.

He does not see the orphans as children but just as a mean to achieve his task. This might be a result of himself being an orphan and having to survive the orphanage by learning how to follow strict rules.

Even him saving Hugo from the train might simply be him following rules (keep the station safe) instead of saving another being for the sake of it.

It is (almost) left undisclosed whether he has lost his empathy for others in this process. But it is easy to believe so.

But there is one scene where he acts completely out of his assumed character. When the wrench falls down from the clock he is complaining about Hugos Uncle being drunk and unsafe, but he is not even to the slightest concerned about his own well-being (even when being almost killed by the wrench), but instead raises the genuine plea "you could have injured a child". It is also the only time that he loses his temper.

This leads me to believe that he is secretly trying to save the kids on the same path that he had to take (as cruel as it might turn out).

So from this perspective his purpose might not be what the first impression of being a guard dog has led us to believe, but to "save children" instead. And he has simply taken the best approach to do so that he knows of (as inefficient as it might be). This would also mean that the cruel achievement-board is actually a list of children he has saved and brought to the orphanage.

Only at the end, when Hugo is taken in by Georges, he realizes that there is another way out of orphanage.

Not the answer you're looking for? Browse other questions tagged plot-explanation hugo .

7
What is the Significance of the train wreck in Hugo?
10
What does "they are holding" mean?
4
What are the units for these numbers?
4
What are these silver colored pipes the Jackal is installing under his vehicle?
1
Why did all the Characters in "Hugo" have English Accents?
0
What are these medicines in the Comedian last fight shot?
1
What planets are these witnessing the fall of Imperial Destroyers?