Does Brendan Gleeson also play the role of the fiddlist in the confederate field hospital?

In 2003's Cold Mountain, Brendan Gleeson plays Stobrod Thewes, the father of Ruby Thewes played by Renée Zellweger. His character is a traveling minstrel, and according to imdb, Gleeson is a fine fiddle player who plays the violin pieces himself. His bandmate in the movie is Georgia, played by Jack White of the White Stripes, who also performs several songs for the soundtrack. He first appears in somewhat near the end of the film.

Here is a still of Brendan Gleeson as Stobrod Thewes:

In a scene very near the beginning of the movie, a fiddlist plays a song called Bonaparte's Retreat for a dying Confederate soldier in a field hospital, and then a second more sweet song. According to this youtube the second song is either Great High Mountain or Am I Born to Die.

Here is a still of the field hospital fiddlist: 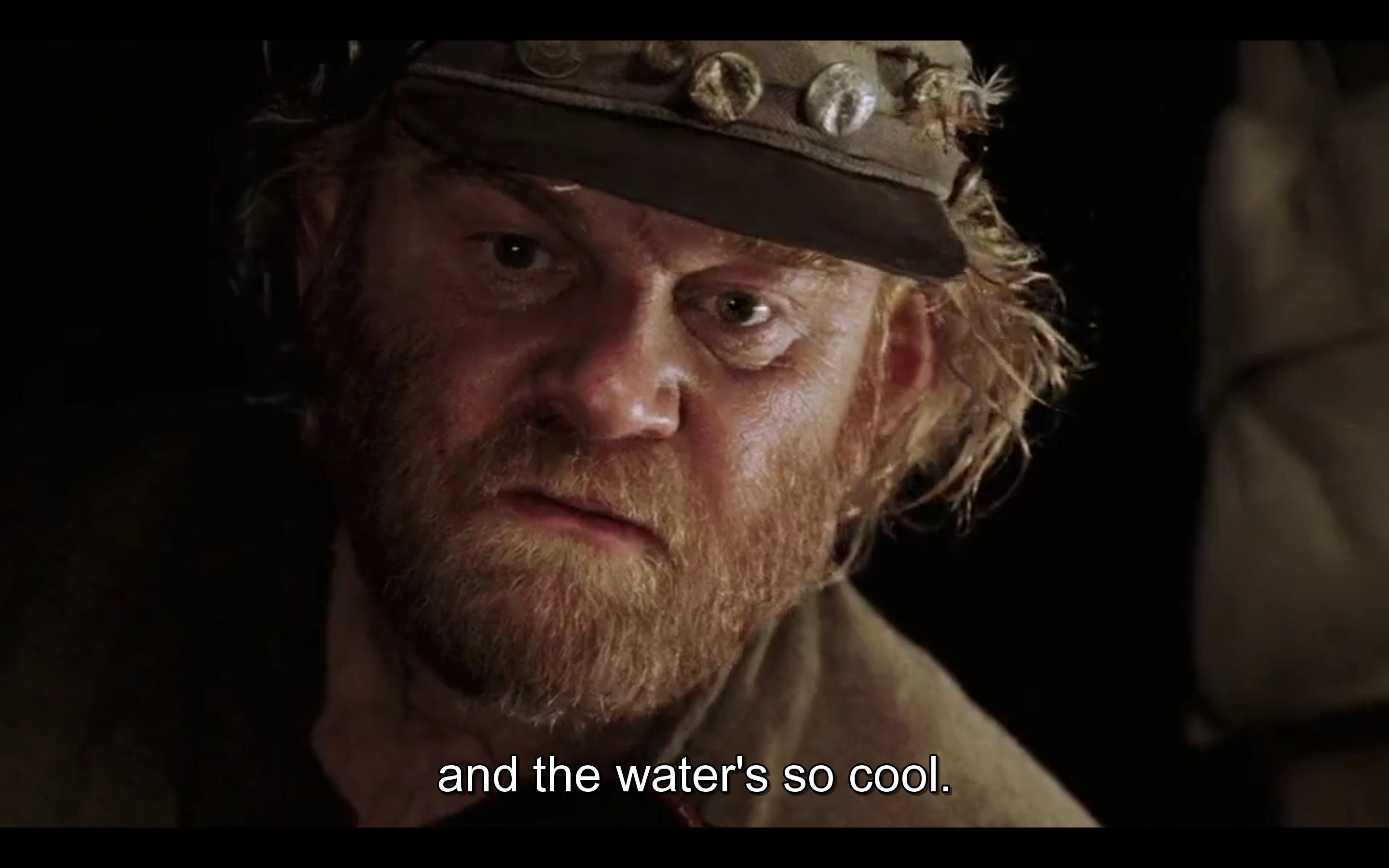 Is this other character also played by Brendan Gleeson or someone related to him? On the one hand,

On the other hand,

So what is that character's name, and which actor portrays him? Is it Brendan Gleeson? Or some relation of his?

The character at the starting of the movie, the one who is comforting the dying soldier at the field hospital and the one appearing at a later time as Ruby's father is the same one.

Three years later, Inman fights in the Battle of the Crater and survives; he then comforts a dying acquaintance from Cold Mountain, while fellow soldier Stobrod Thewes plays a tune on his fiddle.

By the time the story starts, he's gone off to fight in the war, and Ruby thinks he may be dead. Stobrod turns up partway through the story, having deserted the army......Eventually, the Home Guard finds Stobrod and Pangle and brutally shoots them. Astonishingly, Stobrod survives this....

Also if you are still in doubt here's movie script by the director. A search for Stobrod Thewes and we get him at the beginning of the movie:

Inman turns away, sees another Rebel, extravagantly costumed, a strange FIDDLE head protruding from his knapsack. This is STOBROD THEWES. He's bent over a dead Federal, examining his mouth. He reaches behind his back and roots around in the knapsack, producing A PAIR OF PLIERS, WHICH HE INSERTS INTO THE CORPSE'S MOUTH. He's yanking away when A SWINGING BOOT connects with his head and knocks him to the ground. ......

So, he IS Ruby's father at the beginning of the movie, with whom you are having doubt.

Not the answer you're looking for? Browse other questions tagged casting cold-mountain .

12
Why does John Travolta play a woman?
16
Who were the choices for the leading role in Total Recall (1990)?
6
What happened to the first actor to play Dan?
1
Was Will Smith really considered for the role of “Mr. Smith?
3
What role Bob Anderson did play, Imperial or Rebel?
3
Why did Michael Praed not play the main role in Robin of Sherwood season 3?
1
Did the actor Wylie Watson play the role of waiter in The Lady Vanishes?
4
Why does Jonathan Hyde play two roles in Jumanji?