Why would Odin keep a fake gauntlet?

We all know that Odin's vault has hinted us at some potential surprises in the MCU(maybe,maybe not).
But why in the world was he having a fake gauntlet in there ? (As pointed out by Hela in Thor : Ragnarok). 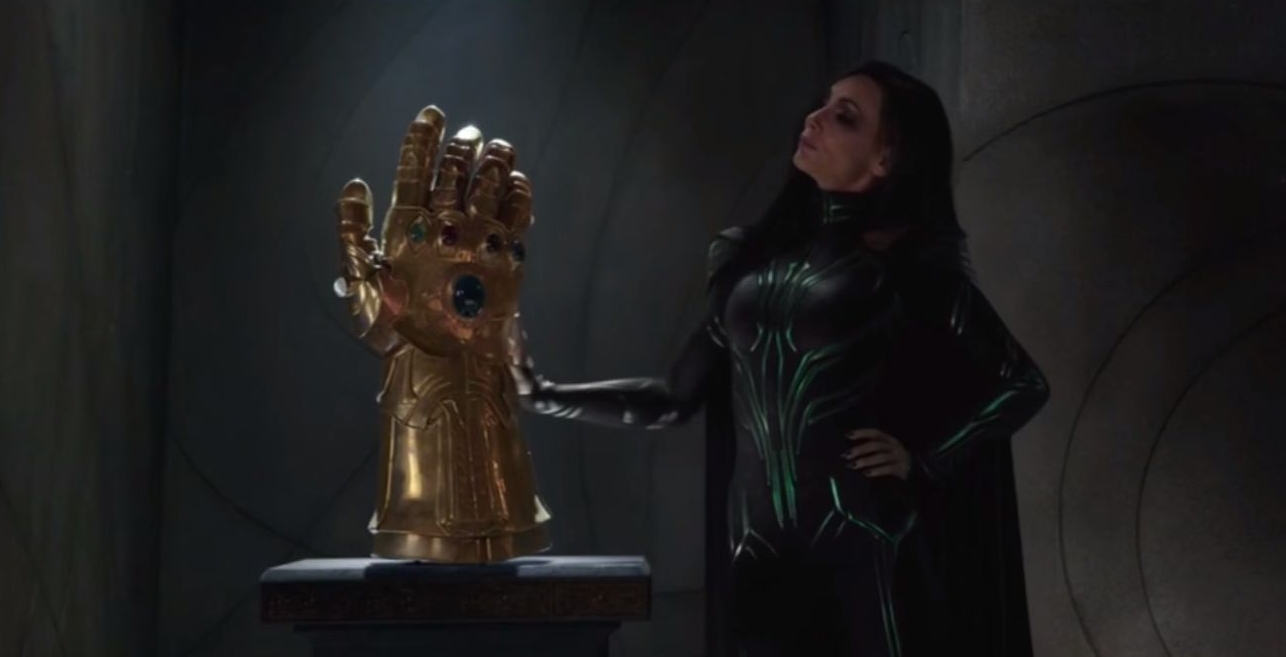 I mean we are talking about the All-Father, who is known throughout the universe for what he has done and can do. Why did he have a fake gauntlet in the first place ?

Infinity gauntlet when combined with stones is a very powerful item and it gives the holder can do anything he wants. Odin is the ruler of Asgard and protector of the Nine realms. By show casing that he had fake gauntlet, he is giving hope to Asgardians and nine realms that it is with him in safe hands. If he doesn't do that, Asgardians and other realms would know that Asgard is not protected anymore. Taking advantage of this situation, enemies would wage a war. (We saw in Thor:The Dark World that Asgard was attacked.) That would create chaos. His throne and power could be in danger. To avoid all this chaos, Odin put a fake gauntlet in his vault.

In an interview to /Film, Kevin Feige, president of Marvel Studios explained this theory.

As we learn in this movie, he vanished his firstborn daughter because he sort of got what he needed, he got to the top of the Nine Realms and it was like oh, this is much too violent. And Hela says, glad to have it, ashamed of how we got it. And we see that mural in the movie of [how] it was not a pleasant history of how Asgard got all that gold. So Odin has a history of doing what he wants to do to maintain power.

“Well, it’s fake.” Because if the Asgardians knew that there was something that had that kind of power, that could theoretically wipe out Asgard and whatever else with a, in the comics, a literal snap of the fingers. They might question Odin’s ability to protect them.

So, to ensure Asgardians that infinity gauntlet is in safe hands, Odin put a fake one in his vault. Moreover, who doesn't like fancy antique pieces in their vault?

You see, Hela didn't really call the Infinity Gauntlet a fake. She was actually referring to the Infinity Stones, and the reason as to why Odin had the Infinity Stones in his vault in the first place is that he wanted to keep as many Infinity Stones out of reach from people aspiring to use them as many he could. Which is why he thought that instead of collecting the real Stones he could just keep fake ones in his vault and no one would ever know since Odin's Vault was one of the safest considered places in the MCU. The main idea behind this was that is people thought that the real Stones are in Odin's Vault no one would go searching for them. The reason Hela knew the stones were fake is because she had once aspired to collect them all and knew Odin's real strategy to stop people from collecting them. Hela couldn't have known that the Infinity Gauntlet existed in the first place because it isn't like there's a Daily Bugle or a regular newspaper about the Nine Realms delivered to the prison Odin kept her in.

9
Who are S.H.I.E.L.D accountable to in the Marvel Cinematic Universe?
9
Does Marvel universe have more than 9 realms?
21
Why didn't Hela use Odin's spear to open the Bifrost?
31
How did Odin know about the Infinity Gauntlet?
18
Why/how is the Reality Stone an actual stone now, instead of a liquid?
13
How did Hela know that the Gauntlet was a fake?
21
How did Odin keep Hela away from Asgard?
16
How to kill an Asgardian?
8
Why was the right-handed (fake) Infinity Gauntlet so large?