Wasn't Agent Poindexter suspended when he tried to use his FBI credentials?

In Daredevil S03E08, when the police arrives at Dex's house responding to a 911 call wherein Matt and Agent Nadeem had entered his house, he claims to be an FBI agent, and requests the police officer to check his ID in the wallet in his pocket.

But wasn't he suspended from the FBI earlier in the show? How come he still had a badge to float around, misusing it to his benefit?

But wasn't he suspended from the FBI earlier in the show?

He was placed on Leave pending the outcome of the shooting investigation, in fact he's told to treat it as a "paid vacation".

Certainly he surrenders his belt badge and gun but that doesn't mean he's actually suspended which is more punitive than leave.

How come he still had a badge to float around, misusing it to his benefit?

He specifically refers to his ID which isn't the same as a badge although these often go together in the same ID wallet/folder, like so. 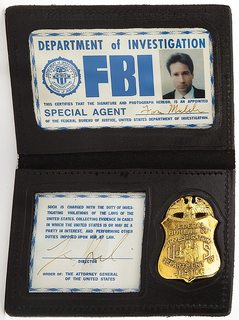 We see him surrender his badge (or at least his belt badge) but he'd still be entitled to carry around the ID portion since, until he's actually fired.

76
Why does George Mcfly employ Biff to wax his car after he had previously tried to rape his wife?
3
Was Fenton Mikes planning the actions FBI agent in Frailty (2001)?
3
In the film Donnie Brasco, why did the FBI tell the mafia that Donnie was an undercover agent?
3
Why did Jack cry when Ma tried to explain about the world?
6
Why didn't Murdock notice that Fisk wasn't lying when he talked about improving the city?
4
Why do Declan & Carter Preston rush to Isabella's house when they find an FBI access code?
20
Why didn't Dr Strange use his sling-ring?