I'm making a podcast about movies. One episode is about Jim Jarmusch's Ghost Dog.

I can not find out in which city is the story happening. There are just some cars and their license plate numbers. As you can see in my screen captures, the first one says "Industrial State".

Later in the film when, we see a different style of license plate, when ghost dog leaves town for a murder. In the middle of the road, he parks his car and changes its number with a car that belongs to a family. The new plate says "Highway State".

What do these license plates say about where the story takes place? Why did Jim Jarmusch use these? 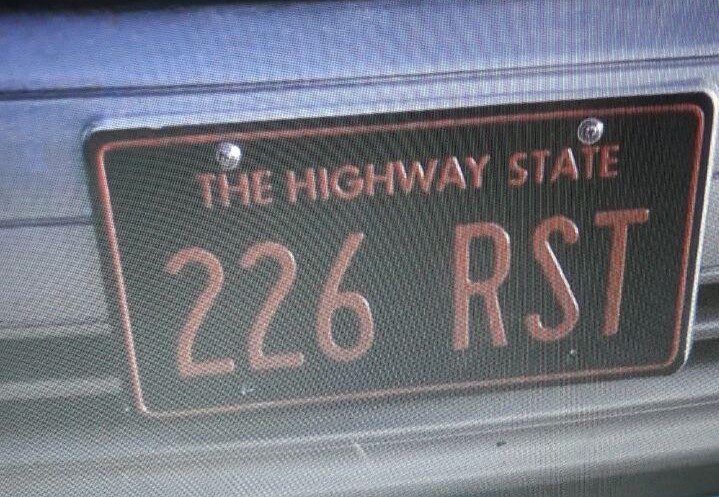 The movie never mentions where the story is set

The wikipedia article for Ghost Dog explains that the film never mentions exactly where the story is set, but it was filmed in Jersey City, New Jersey and the license plates in the film use fictional state nicknames for the state of New Jersey, USA.

The film was shot mostly in Jersey City, New Jersey, but the movie never mentions where the story is set. License plates reveal it is in "The Industrial State" and a vehicle from another state has on its license plate "The Highway State", both of which are fictional state nicknames.

Why are fictional names used?

Ultimately it seems the intent was so that viewers could believe that the story could take place anywhere. It could be in their own neighborhood or it could be in a fictional world. The location of the story is meant to be abstract and allegorical.

One article argues that using fictional names and never specifying the exact location of the story is done deliberately, to build the character of ghost dog into a believable urban legend.

It's never specified where Ghost Dog takes place. It was filmed in Jersey City, New Jersey (you can see the industrial sprawl of the Meadowlands from his roof). When Ghost Dog switches license plates on a stolen car, the plates read "THE INDUSTRIAL STATE" and "THE HIGHWAY STATE." There are some superficial indicators that Ghost Dog occurs in the New York metro (the Holland tunnel appears briefly), but the film could take place in any labyrinthine US metropolis. Ghost Dog could be moseying through your neighborhood.

While another article claims that the story is meant to be allegorical, hence the use of fictional names.

Ghost Dog's world is an abstract, allegorical place, where cars have license plates from "The Industrial State" and "The Highway State." From "Hagakure," the film quotes the standard Buddhist teaching "form is emptiness; emptiness is form," and Mr. Jarmusch sometimes seems intent on demonstrating the truth of this observation.

Not the answer you're looking for? Browse other questions tagged plot-explanation analysis ghost-dog .

6
Is this the grave of a child in Akira Kurosawa's Dreams?
6
Why are spikes used in the movie Troy?
9
Why did filmmakers choose the particular dog breeds that are showcased?
7
Why are goats used as a symbol for yoga/meditation?
39
Why are dolls, teddy bears, etc. used as horror objects in horror films?
15
Why are Sherlock and Mycroft written as snarky atheists?
2
Who shot Lt. Smith (Wesley Snipes) in the back?
0
Police in movies/tv and license plates
0
What are they burning and why are they doing it?