What is the historic origin of these Indian burial grounds?

I've recently watched two movies that feature the Indian burial ground as a plot point, however in these two films they both actually show a physical burial ground, which appears to be made up of concentric circles of rocks. I've never seen this anywhere other than in movies, and my Google searches mostly lead me to more images from these movies, so I'm curious where the inspiration for these came from. The two films (there may be others) that I saw these in are Pet Semetary (1989) and Bone Tomahawk (2015). Are these portrayals based on any actual burial ground ruins? 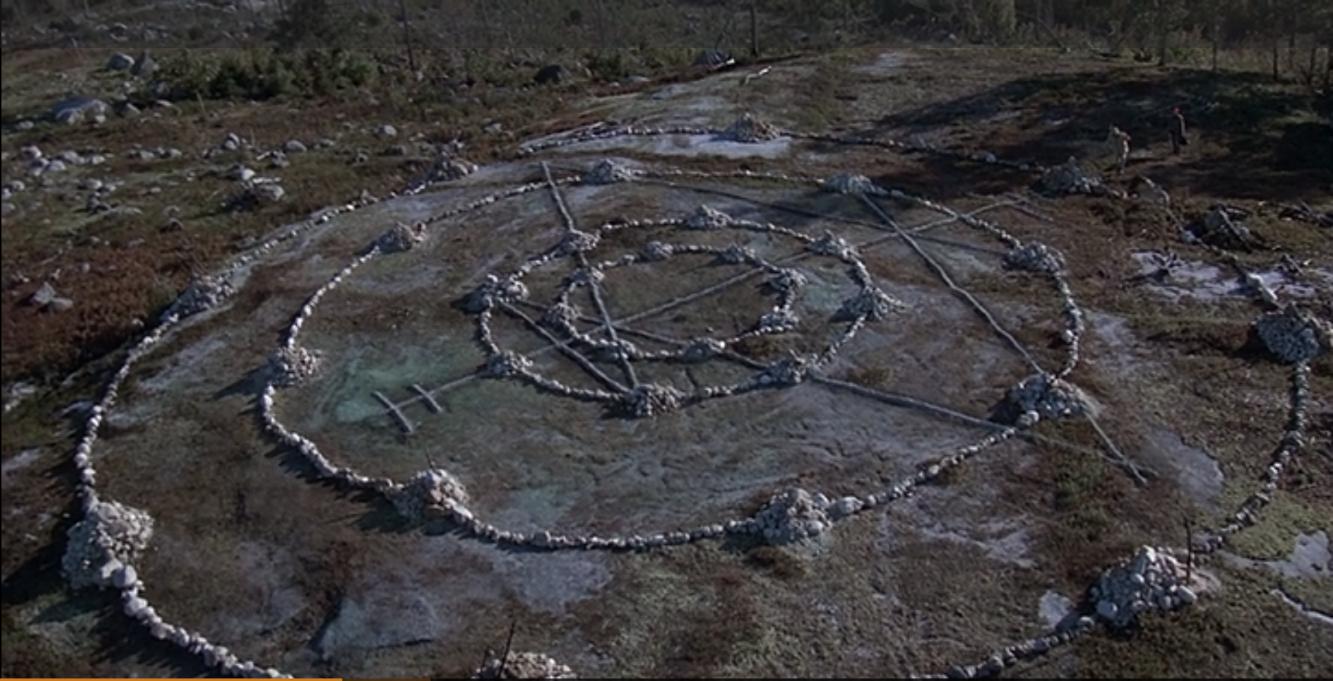 According to Atlas Obscura:

First of all, it’s important to note that the Indian Burial Ground, which is sometimes abbreviated to IBG, is a trope, and not a real thing. Pre-Columbian peoples identified as hundreds of totally different communities, families, or nations, without very many similarities between them. That extended to the burying and treatment of the dead; in some arctic communities, the dead were simply left on the ice to be eaten by predators (what else are you going to do up there?), whereas other groups practiced more familiar burial forms ranging from mass graves to careful and solemn burials to burials performed quickly and with great fear of the corpse. The IBG concept is wrong right from the get-go; depending on how you look at it, there’s either no such thing or an unending variety of them.

The only thing I've found that somewhat resembles the images in these movies is the Medicine Wheel/Medicine Mountain National Historic Landmark, formerly known as the "Bighorn Medicine Wheel":

The stones are arranged in the shape of a wheel, 80 feet across and with 28 spokes emanating from a central cairn. The cairn, a ring-shaped pile of rocks, is large enough to sit in and is surrounded by six others that lie along the wheel’s circumference. Oddly enough, this configuration is not unique to Wyoming. Rather, hundreds of similar stone wheels exist throughout North America.

Known as medicine wheels, or sacred hoops, these special structures have been built by American Indians for centuries. With uses ranging from the ritual to the astronomical, the medicine wheel has been appropriated over time by New Age spiritualists, Wiccans, and Pagans.

20
What was the significance of the necklace?
20
What is the connection between Ragnar from Vikings and Ragnar from The Last Kingdom?
5
What is the term the street thugs called the policemen in Sherlock Holmes: A Game of Shadows?
5
Was the depiction of George Méliès accurate to what we know about his life?
8
What is the significance of the painting at Rachel's parent's house?
3
In what time period the series Arang and the Magistrate set?
26
Is Christopher Nolan's Dunkirk historically inaccurate in portraying absence of the Indian army?
4
What is Wakko wearing in the "about the 90s" part in the "Catch Up Song" in the 2020 Animaniacs reboot?