Family History of Drax The Destroyer

OK, so in Guardians of the Galaxy, Drax joins the party in the hope that he will get to face off against Ronan the Accuser, whom he holds directly responsible for killing his wife and child. Indeed, Ronan taunts him with a description of their last moments.

"Their screams were pitiful"

However, by the end of the film, despite having defeated Ronan, Drax vows to go after Thanos, who he considers 'really responsible'.

Yet by the time we get to Avengers: Infinity War, Gomora describes to Thor how her father (Thanos) had committed countless massacres on many planets , "including my own", adds Drax. 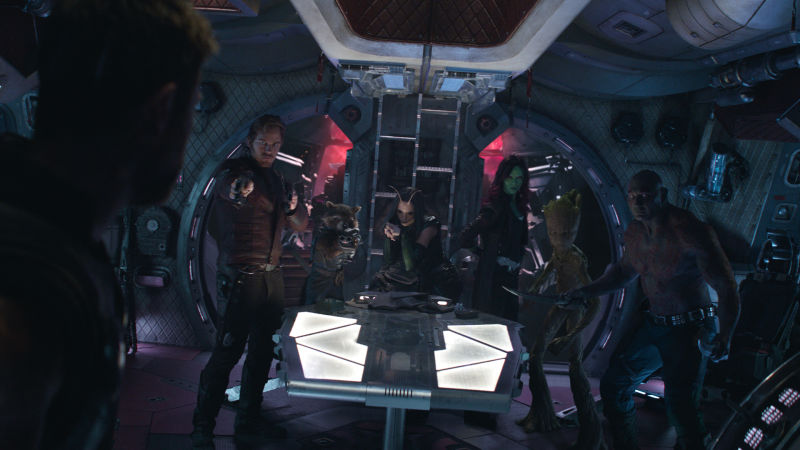 So what is the deal here? Did Ronan commit all of that genocide in and prior to Guardians Of The Galaxy off his own bat or was his alliance with Thanos intended to be part of the Titan's cull on the universes population (as I thought that his prime task during and before the film was to retrieve the Power Stone)?

So what is the deal here? Did Ronan commit all of that genocide in and prior to Guardians Of The Galaxy off his own bat or was his alliance with Thanos intended to be part of the Titan's cull on the universe's population (as I thought that his prime task during and before the film was to retrieve the Power Stone)?

Take the example of when Thanos meets Gamora. The people are split into two groups, and on Thanos' command, Thanos' henchmen shoot one of the two groups. Thanos did not technically kill Gamora's people himself, he "merely" led others to do so (I'm aware that this is an understatement - but it's technically true).

Thanos can't physically kill every single inhabitant (of the unlucky half) of every planet himself. He must have others who operate on his orders.

It seems similarly unlikely that Thanos is personally present for every group of people where half of them are killed. Again pointing to the Gamora scene, the people in that square were by no means the entire population of the planet.
And it seems counterproductive/nigh impossible for Thanos to only sort and kill groups one by one. Word would spread people would go into hiding, and how would you tell a "lucky survivor" from someone who hasn't been through the culling yet? Many issues arise if you assume that Thanos' semi-extermination of a planet's populace is a slow process.

The most logical explanation is that Thanos' henchmen - presumably led by a lieutenant such as Ronan, Ebony Maw, ... - operate the kill command at around the same time all across the planet. I'm not saying it's exactly at the same moment, but sufficiently close that word can't spread.

Now consider that the victims of this culling, who are attacked by a lieutenant when Thanos is not present, are liable to think that this lieutenant is the one calling the shots.

This is likely what happened for Drax. He saw Ronan and "his" henchmen show up and kill his family and thus blames Ronan for making the decision that kills his family.

Even if Drax knows about Thanos, his instinct will still be to blame Ronan because he saw Ronan call the shots.

"Here's a call back to Drax's History with Thanos," Russo explained on the commentary. "His planet was treated the same way as Gamora's planet. Drax was put on one side, his family was put on the other."

So Ronan did the act but it was all Thanos's plan.

We know it was Thanos all along, but as the mastermind, at some time, he started it all (OBVIOUSLY). As time went by, his roots grew stronger, there was no stopping him. One could stand by him, or simply die trying to oppose him.

Ronan-the-accuser was one of the individuals designated to a particular area, and he is shown as an executioner too in his very intro, Ronan was the one to PHYSICALLY kill Drax's wife Hovat and daughter Kamaria in the MCU. Note that it was Thanos who killed them in the comics!

In MCU, Ronan remembers their screams, he was physically there, killing them.

In the end, Drax knows he was a mere pawn, so he wanted to kill Thanos as he was the mind behind all this.