What did Walt mean to tell Jesse

In Breaking Bad, Season 2, later on after giving the 480K to Jesse, Walt goes round to his house once more and finds Jesse high, asleep next to Jane, then witnesses her throwing up and choking to death.

Before letting himself into the house though, while knocking on the door, he repeatedly says "Jesse I just want to talk".

What did Walt want to discuss at that point?

Walt had an argument with Jesse... Well, actually it was Jane who had tried to blackmail Walt into giving Jesse the $480K. But there had been a strain on Walt and Jesse's relationship for a while.

So, if you recall, after Walt drops off the money to Jesse and Jane, he goes to a bar and coincidentally runs into Donald, Jane's father. They begin talking about family, not knowing their lives are intertwined, and Donald makes a remark about never giving up on family. Walt had gone back to talk to Jesse, to smooth things over, and when he saw Jane in the throes of death he pretty much knew the best solution was to get her out of the picture.

I'd add an element to @JonnyBones point. Indeed, Walt happens to meet Jane's father (not knowing he is), Donald, in a bar after he brought the money to Jesse & Jane. Walt talks to Donald about his newborn baby girl, his 16 year old boy and then about his "nephew", meaning actually Jesse, and the

...frustration that goes along with "Yes, as a matter of fact, I do know what is best for you, so listen", and of course they don't ; I mean what do you do with someone like that 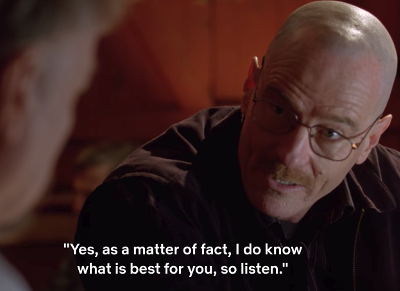 to what Donald responds

Family. You can't give up on them, never. I mean, what else is there?

which makes Walt decide to go back to Jesse's apartment, "to talk".

27
What does Walt mean by 'Inertia'?
8
Relationship between Walt, Jesse and Gus
25
How did Jesse know that Walt did this in season 5?
27
Why didn't Jesse shoot Walt?
28
Why would Gus do business with Walter knowing his brother in-law was a DEA agent?
9
Why did Walt tell Skyler he did that?
19
Why did Tomas have to die?
6
Why exactly did Walt visit Jack's gang?
33
Why is Walt obsessed with Jesse?
7
Why did Jesse completely change when Walt gave him his $5 million in season 5?