In Sleight, how did Bo change the card in the young woman's hand?

Sleight (2017) included a lot of magic tricks. Some of the tricks involving magnetism had a "scientific" (but impossible/ridiculous) explanation.

The movie also included card tricks. In one of Bo's card tricks on the street, a young woman is holding a card (8 of clubs) so it faces Bo. He asks her to imagine any other card, and when she looks again at the card she is holding, it has magically changed into the card she imagined (3 of diamonds). Was that trick ever explained in the movie (like with the magnetism tricks, and most of the tricks Now You See Me)? Or is the audience just supposed to suspend disbelief? 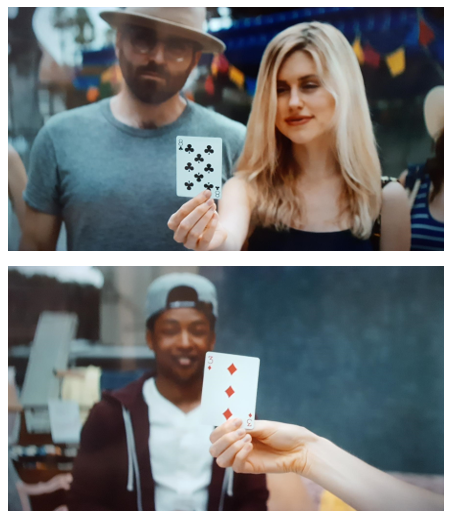 7
How did Carl survive the eyeshot?
12
Why would a teen TV show need an FBI warning inside the Young Justice universe?
2
How did the woman fly through the wind screen?
3
How did the kidney transplant work?
3
How did Saroo find the location of his village?
4
In "Million Dollar Baby", could old Morgan Freeman really knock out that young punk in the ring?
3
How did inmates escape through the sea in Prison Break
3
How did Seth Powers keep the ball spinning?