What Object Is Harry Holding In Prisoner of Azkaban (Film)?

What object is Harry holding in this scene from Prisoner of Azkaban the film?

This is the scene where the Fat Lady disappears after Sirius Black tries to break into Gryffindor Tower and gouges her portrait. The scene takes place following a Hogsmeade trip, but Harry didn't sneak into Hogsmeade on this particular day. So I'm assuming the object is something that either Ron or Hermione brought back for Harry. 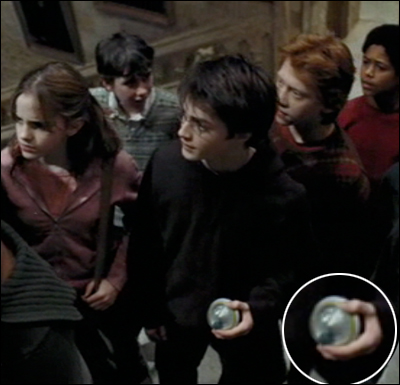 My guess is that it's either a Sneakoscope or a Remembrall. It's the same shape as the Remembrall from Philosopher's Stone (film), but it looks like it's clear and has a black stone rolling around at the bottom while a Remembrall is filled with white smoke that turns red.

In the books the Remembrall is described as marble-sized and the Sneakoscope as being the shape of a top.

It's definitely not one of the Quidditch balls.

Ron does give Harry a Sneakoscope in the book Prisoner of Azkaban:

Harry now turned to his present and unwrapped it. Inside was what looked like a miniature glass spinning top. There was another note from Ron beneath it.

Harry – this is a Pocket Sneakoscope. If there’s someone untrustworthy around, it’s supposed to light up and spin. Bill says it’s rubbish sold for wizard tourists and isn’t reliable, because it kept lighting up at dinner last night. But he didn’t realise Fred and George had put beetles in his soup.

What is this object?

It is the sneakoscope that Ron gives to Harry; the angle in the image you display makes it look like a ball, but it's a poor perspective. It actually is a top, with the silver portion being the top's point and the clear sides tapering down towards it. The scene where Harry initially receives it from Ron was cut from the theatrical release but included on the DVD as an extra; here it is on Youtube: