Why are the American flags backwards on the warden's uniform in Orange is the New Black?

Sadly, it needed me to get to the 4th season, till I recognized, that the American flags on the warden's uniform are wrong. They have the stars in the upper right corner, instead upleft. 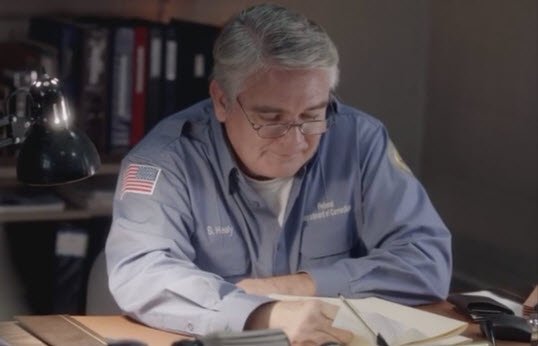 Is there a reason for this?

It's traditional (but not required except in the military) for the US flag to be represented as flowing backwards as the person moves forwards.

Think of the flag, not as a patch, but as a loose flag attached to the Soldier's arm like a flag pole. As the Soldier moves forward, the red and white stripes will flow to the back.

This article explains it better than I can.

Civilians often wonder why the US Army Flag Patch is reversed. The answer is: not all Army Flag Patches are reversed, but only those worn on the right shoulder. The reason has to do with proper display of the flag.

In application, then, flags are displayed on moving vehicles with the blue-star field always displayed towards the front of the vehicle. In this way, the flag appears to be blowing in the wind as the vehicle travels forward (flags are always attached to their flag poles on the blue field side). If the flag were not reversed on the right hand side of the vehicle, the vehicle might appear to be moving backwards (or "retreating").

The next time you visit an airport, notice that the US-flagged aircraft also have a "reverse" flag painted on the right side of the aircraft.

For flag patches worn on uniforms, the same principle applies: the blue star field always faces towards the front, with the red and white stripes behind.

Think of the flag, not as a patch, but as a loose flag attached to the Soldier's arm like a flag pole. As the Soldier moves forward, the red and white stripes will flow to the back.

4
What is Mrs Healy drawing on the wall?
8
Digital makeup for Mystique
4
Is the Orange Is The New Black lay-down alarm real?
9
How accurate is the plot in Netflix's show 'Orange is the New Black'?
6
How accurate is this depiction of a big prison corporation?
15
Why are the Queensguard in Game of Thrones (S07) wearing black armour?
6
Can a private company make decisions over prisoners' freedom?