Why does “The Last House on the Left” have that title?

In the original film The Last House on the Left (1978) and the remake in 2009 the house in question is a lake house in the woods with no other houses around. So what is the meaning behind the title The Last House on the Left? It sounds like it would be referring to a house on a street in a suburban neighborhood, so I don't quite understand how the title refers to the house in the movie. What was the reason Wes Craven chose this as the title?

They choose the name The Last House on the Left after going through different names even though it doesn't make sense.

May be they didn't get a good one in time.

Wes Craven originally called the screenplay Night of Vengeance. Then it was Sex Crime of the Century, quoting a line of dialogue from the movie. Krug & Company, after the villains, was deemed not suitably ominous. Someone eventually came up with The Last House on the Left, which is ominous even though it doesn't make sense. (The house is isolated on a country lane with no other homes nearby.)

I have no idea why the movie is called "The Last House on the Left".

In some movie scenes when people arrive at a destination that includes a house one can see other houses nearer and beyond it on the same side of the road, and so the viewer can say that is must not be either the first or the last house on that side of the road but must be one of the middle houses.

And in other movie scenes when people arrive at a destination the viewer might not be able to tell if there are any other houses on that side. And if they can't tell, that house could possibly be the last house on that side.

If at least one of the houses in the film could possibly be literally "the last house on the left" there won't be any need to speculate about such interpretations.

Tha answer can be found on the original movie poster for the 1972 version o fthe film: 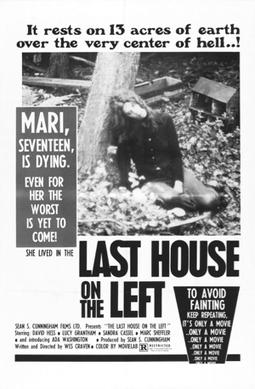 "She lived in the last house on the left".

Not the answer you're looking for? Browse other questions tagged title the-last-house-on-the-left .