At end of Iron fist S2, Who carries the series title?

Season 2 of Iron Fist is now available on Netflix and I watched all episodes.

While it is a marked improvement over Season 1 and the Defenders mini series, the conclusion was rather confusing.

Colleen is shown stopping a crime while her katana glows white like her fist and Danny shoots two guns while his fists (and the bullets) glow yellow.

Which of these two is now the Iron Fist?

From what I had seen in the earlier episodes, the power of the dragon was transferred to Colleen, so Danny shouldn't have any special abilities anymore.

The correct answer would, technically, be Colleen Wing.

She had the Dragon's power transferred to her through the tattooing ritual while Danny no longer had it.

Then, of course, there is the time jump about which we know nothing where Danny has apparently learned to channel his chi again and use it to magically empower pistols. 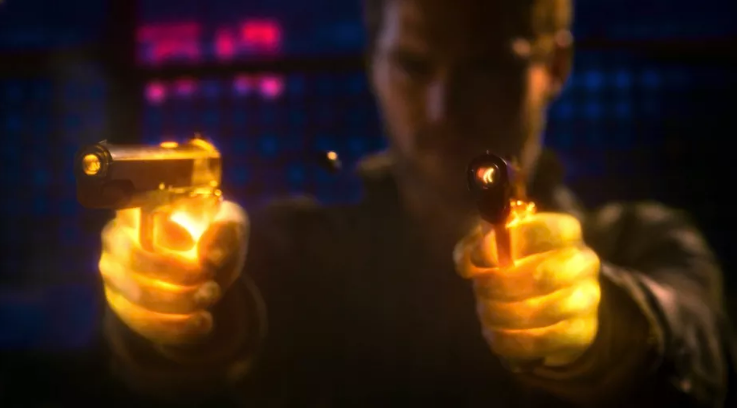 The "powered pistols" are a reference to Orson Randall (and more about him, an earlier Iron Fist who trained Wendell Rand, Danny's father (at least in the comics).

Not the answer you're looking for? Browse other questions tagged plot-explanation marvel-cinematic-universe iron-fist .

16
What is the purpose or meaning behind the hot rod in the Iron Man series?
27
How did Tony fix himself by the end of Iron Man 3?
6
Who is the copycat in the Hannibal series?
9
In Iron Man 3, who is the Mandarin's Boss?
5
Does Stan Lee's cameo in Iron Fist have any meaning?
2
How was the Iron Fist supposed to protect K'un-Lun and destroy the hand?
42
Why did Vision end up in Iron Man's team?
2
Why is the actor who plays Davos not East-Asian and the one who plays Bakuto not Japanese?
4
Is Iron Man stronger than the Hulk?