What's the significance of the Disney movie intro ident?

At the start of recent Disney movies, there's a short 30 second animation of a river with an old sailing ship, a bridge with a steam train and then the familiar Disney castle and fireworks. 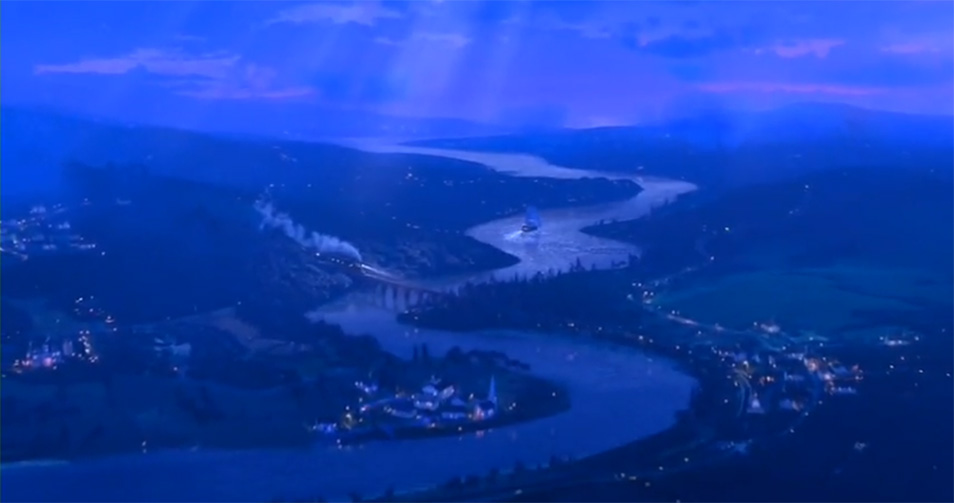 According to the Logos wiki,

In 2006, Walt Disney Pictures started using a new intro with a new CGI animation with a very complex depiction of the Sleepy Beauty Castle and its surroundings. It was a clear change from the old blue and white intro with its stylized castle and 2D animation.

The new intro was first used on Pirates of the Caribbean: Dead Man's Chest, which premiered in the United States on July 7, 2006.

Starting with The Muppets, "WALT" and "PICTURES" have been removed from the logo.

2006 is the year that Disney repurchased Pixar, and the year after Robert Iger took over Disney. There is a Pixar Disney introduction but, oddly, this new intro was not created by Disney studios, but by Weta Digital in New Zealand.

On a night sky background, we see a star, a la Pinocchio. Then, some clouds appear, a la Mary Poppins, and a pirate ship, a la Peter Pan. We then see the castle, done in CGI, while different fireworks are appearing. A circular line is drawn over the castle (in the same vein as the previous logo), then the castle enters many dots from the bottom of the screen to reveal "Walt Disney", in the post-1979 Disney script logo font, albeit slightly revised. "PICTURES" fades in, while the circular line is nearly staying visible on the logo.

The train could reference Dumbo, but I have not found confirmation of this. 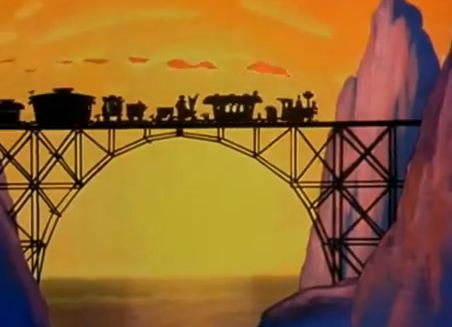 (about 12 minutes into the film)

This is conjecture on my part, but I believe these are idealizations of other attractions at the various Disney theme parks. (Trying to find a source to back me up.)

The scene before the castle reflects the Lewiston, Idaho/Clarkston, Washington area (separated by the Snake river). Steamboats were once used on this river. This is where Walt's wife Lillian is from and where they were married!

If you view an image of the Lewiston/Clarkston valley, you'll see the basis of this image at the confluence of the Snake & Clearwater rivers.

How about the hidden pics in the castle? Winnie the pooh peeking out of the castle spire on the right and donald duck is formed in the reflection in the center of the castle and then there is pluto on the left formed by two arches and a black spot for his nose. Thats all i have seen so far you do have to use your imagination a bit, but i think thats what walt would've wanted.

I don't necessarily think this is THE answer, but it reminds me a lot of the scene in Peter Pan where they fly over London. The coloring of everything, especially. I always just thought it was a clip like that of some bridge that crosses the Thames.

Here's the exact picture I feel it shows, but that's just me.

Call me crazy, but I've always thought that the steam train in the background was the Polar Express, and the ship in the river is from Peter Pan. And of course, the good old castle.

It represents the Orlando area, The star in space at Kennedy Space Center, Harry Potter's Train at Universal, The ship, representing the Port Canveral cruise port and of course the Iconic Castle at Walt Disney Resort.

Not the answer you're looking for? Browse other questions tagged production disney .

22
What Disney animated film was the first to feature blood?
24
Why have Disney princess films post-2009 all started with the princess as a child?
24
Why do Disney and Pixar animated movies contain the 'A-113' easter egg?
3
Disney princess cross overs in Sofia the First
7
Why are most of the Disney Princess movies musicals?
8
Was there a production rule forbidding the depiction of parents in Disney shows such as Ducktales?
8
What's the production process for songs for Disney animated musicals?
48
What properties did Disney buy from 21st Century Fox?
7
Does Disney now own Howard the Duck, and why?
59
Does Disney no longer produce hand-drawn cartoon films?