What is the significance of mirrored N in the title of The Nun?

As we can see in this movie poster for The Nun, the N is mirrored. 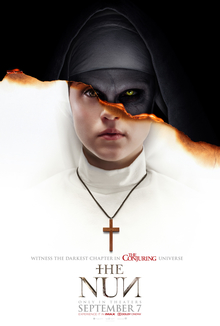 What is the significance of this mirrored N? Is it related to the movie plot or character and in what way?

For me, it feels like it's based on a few reasons. That being said, I haven't found sources for these, it's solely my analysis.

The word 'nun' is a palindrome, and a mirrored N makes it symmetric and visually appealing.

Valak is a Demon, disguised as a Nun. He is the King of Hell, and is trapped in the house of God. He is the master of tricks and illusions. Just like the T in "the" is stylized to look like a Christian cross, the symmetric Ns symbolize the duality of this entity.

In recent times and certain cultures, inverted symbols very often represent their opposites. Inverted crosses, for example, are no longer the symbol of Christ, but of Hell. Heaven is up, Hell is down. A mirrored N can also symbolize the corruption of something pure, in this case the nuns from the convent.

Recently, however, it is common for the upside-down cross to be used as a symbol of atheism, humanism, and the occult. Upside-down crosses appear in horror movies such as The Conjuring as a signal of demonic activity. In these contexts, the obvious intent of the inverted cross is to declare an opposition to Christianity. Turning the cross upside down becomes a means of denying the truth of Christ and mocking His sacrifice.

For example, here is a parody of Conjuring 2, where Valak (this same demon!) turns all the crosses in the room to possess a character.

BlueMoon93's answer seems spot-on, to me, particularly the part about inversion connoting subtle corruption or infestation. We see the same principle of "invert a random letter to indicate demonic stuff" happening in at least one other recent (2012) horror movie — not coincidentally, also nun-themed. 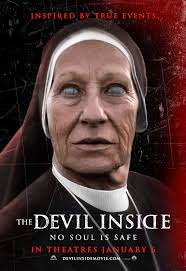 Although I can't find a proper official source, from what I found it's the effect called The Backwards R(The Backwards Я effect).

TvTropes states that The Nun is the earliest film in The Conjuring series chronologically, taking place in 1952, which also confirmed by producer Peter Safran.

During the filming of Annabelle: Creation, Safran revealed that The Nun would chronologically come first in The Conjuring franchise's shared cinematic universe, making it as a further prequel to The Conjuring series and Annabelle series. He said, "We have a board that we created that has what we hope will ultimately be our series of movies. We have it in chronological order, so we can keep track of where it all happens.

Wikipedia states that storyline to be,

The plot follows a priest and a Catholic novitiate as they uncover an unholy secret in 1952 Romania.

Since it was the earliest dated installment, and based on Romania, the backwards N was used to give out more feeling about the movie, the era that story was based on, location and also giving out some kind of feeling of older times dark magic and horrors. Consider the characters and locations in the movie like Valak, which is a goth/goetic demon, The St. Cârța Abbey which bears similarities with Romanian Cârța Monastery which all points out on the era that story takes place on. Not an official source based, but my observational analysis.

If we further concentrated on the above mentioned backwards R effect, tvtropes states that,

In a lot of Western posters, you see something that could be called "Faux Cyrillic" — replacing Latin characters with visually similar Cyrillic ones, to make something look more Russian. Don't expect them to be consistent with it, though.

This is because Cyrillic is based on medieval Greek completed with Glagolitic (sometimes inspired by Hebrew — ц, ш) letters, but due to reforms by Peter the Great, it has the same basic design principles as the Latin alphabet (stroke thickness and placement, etc.). This has resulted in an alphabet with letters that range from deceptively familiar to the strikingly different. The Latin alphabet itself is based — via the Etruscan/Old Italic one — on the archaic (pre-classical) Greek one, and Hebrew and Greek scripts are based on Phoenician script, so they are all related. Where the (English form of the) Latin alphabet has twenty-six letters, the (Russian form of the) Cyrillic alphabet has thirty-three.

The perpetrators ignore the fact that these letters are, in actual Russian, pronounced completely differently from the Latin characters they are supposed to represent, which results in unintended hilarity for members of the audience who can read Cyrillic script.

Not the answer you're looking for? Browse other questions tagged posters the-conjuring-universe the-nun .

4
What was the significance of nun attire of the demon in The Conjuring 2?
5
What was the originator of the SEE! ... SEE! ... lines on movie posters?
5
What is the significance of the missing mouth in the Silent Hill and Silent Hill: Revelation film posters?
44
What is the meaning of this poster for The Lobster?
18
What exactly does the poster of Schindler's list depict?
6
What is the importance of the coffee cup in the poster of Awe?
4
Possible continuity error in The Nun?
2
How did an inverted cross appear on Frenchie's neck?
2
Where did this boy come from in The Nun?
3
What's the cross key for in The Nun?