What is Stuart's full name?

What is the full name of comic center's owner Stuart from The Big Bang Theory?

Why don't they say his full name like they do for others like Sheldon and Raj and Howard? I feel he is mostly ignored by others by using just his first name.

Stuart Bloom is the owner of The Comic Center of Pasadena, the comic book store the guys frequent. Stuart is a talented artist and graduate of the Rhode Island School of Design.

You mentioned that I feel he is mostly ignored by others by using just his first name, but it's debatable. While agreeing and even reaching for Stuart in certain scenarios, which Stuart is more of the expert, sometimes they just ignore because of that Stuart wasn't close to anybody in the group. If someone has a requirement regarding comic books or arts, they seek Stuart's help. This happened a few times, Penny asked a recommendation for a comic book for her niece. Multiple times guys have asked Stuart's opinion on comic characters or incidents based on comic books/characters...

On the other hand, it feels Stuart was just neglected away, happens mainly because of he is not a key member of the group, but on later seasons, he becomes more and more important with him living in Howard's house, being a close friends with Raj, after Howard left to International Space Station, Stuart coming back to live with Howard and Bernadette and helps them with their daughter. These changes made Stuart much more close to the group and he became somewhat a close friend for everybody.

His name (Stuart Bloom) was revealed in his Facebook page: 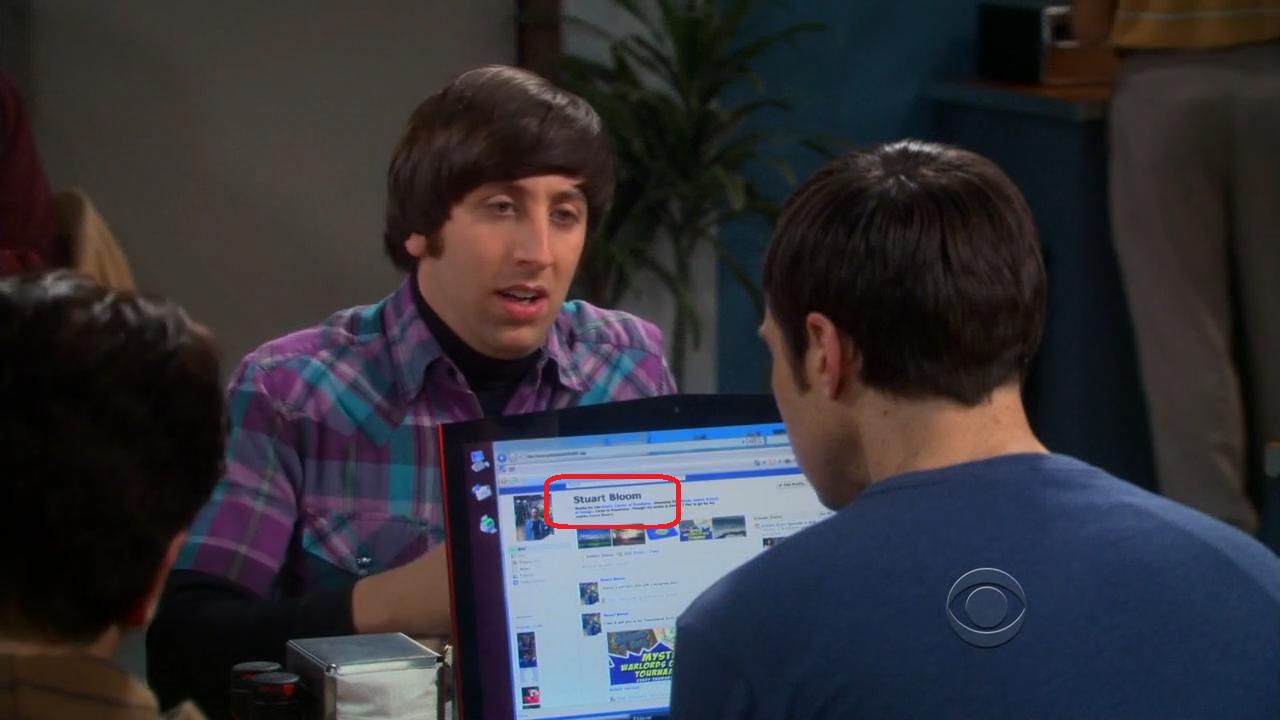 And his full name is Stuart David Bloom, as Howard mentions his middle name in S08E24 aka The Commitment Determination:

His surname even got mentioned later in The Mommy Observation:

Raj: You can’t leave. You’re a suspect in the mysterious murder of Stuart Bloom.

Bernadette: I didn’t know his last name was Bloom.

And he got ignored whenever they didn't need him, like he noticed himself in The Scavenger Vortex:

Stuart: Oh, my pleasure. Always happy to help out with fun things that I wasn’t invited to be a part of.

Stuart: Yeah. So when you guys plan fun activities, does my name even come up, or…?

Raj: I invited you to my murder mystery party.

So it's just a running joke that they forget him when they don't need him. They didn't even buy anything from his shop that day either:

Stuart: So no one’s gonna buy anything.

IMDB gives the name as Stuart Bloom (played by Kevin Sussman). That he is largely being ignored is, I think, part of the character (he often makes bitter, self-deprecating jokes about the social life and romantic prospects (or lack thereof) of a comic book store owner).

13
What is the IQ of Raj?
15
Is Raj still working with Sheldon?
41
What is Penny's last name in Big Bang Theory?
10
When will Howard Wolowitz get his PhD?
8
Who was Penny mentioning in S02E04 "The Griffin Equivalency"?
5
How was Sheldon able to play around with Rajesh and Howard
2
First Big Bang Theory episode with none of the guys in pre-credit sequence
6
What's the exact problem with Raj?
1
Why does not Sheldon use Taxi Cabs for his Transport issues?