How did the Mosasaurus survive that long?

If (numerous) online sources are to be believed, the events of Jurassic World: Fallen Kingdom occur 3 years after the events of Jurassic World. Is there any explanation (in- or out-of-universe) as to how the mosasaurus survived that long? Clearly it wasn't being fed. Was there some other food source? Or is there some indication that its escape scene (the "salvage vessel" opening scene of Kingdom) occurred closer to the end of the World, while the rest of Kingdom did not happen until much later?

According to producer and co-writer Colin Trevorrow the opening scene takes place about a month after Jurassic World:

The opening sequence is set just after [Jurassic World]. There's 3 years that pass. We didn't put that type up onto the screen, but the opening sequence could even be weeks after, or a month after, and then time passes to allow them to create [the Indoraptor].

(this however makes me wonder why the team tasked with retrieving the Indominus Rex DNA were so sure that the dinosaurs were dead, especially since Claire's Dinosaur Protection Group seemingly worked hard to keep them alive)

This question on SF&F has at least a partial explanation

In the film Jurassic World we see the mosasaurus jump out of the water to catch a pteranodon as well as beaching itself to catch the i-Rex™.

Presumably it can simply keep doing that whenever it gets hungry. There's apparently no shortage of dinos (both flying and non) left on the island at the end of the film.

Indeed, the Mosasaurus was trained to eat that way as demonstrated in Jurassic World 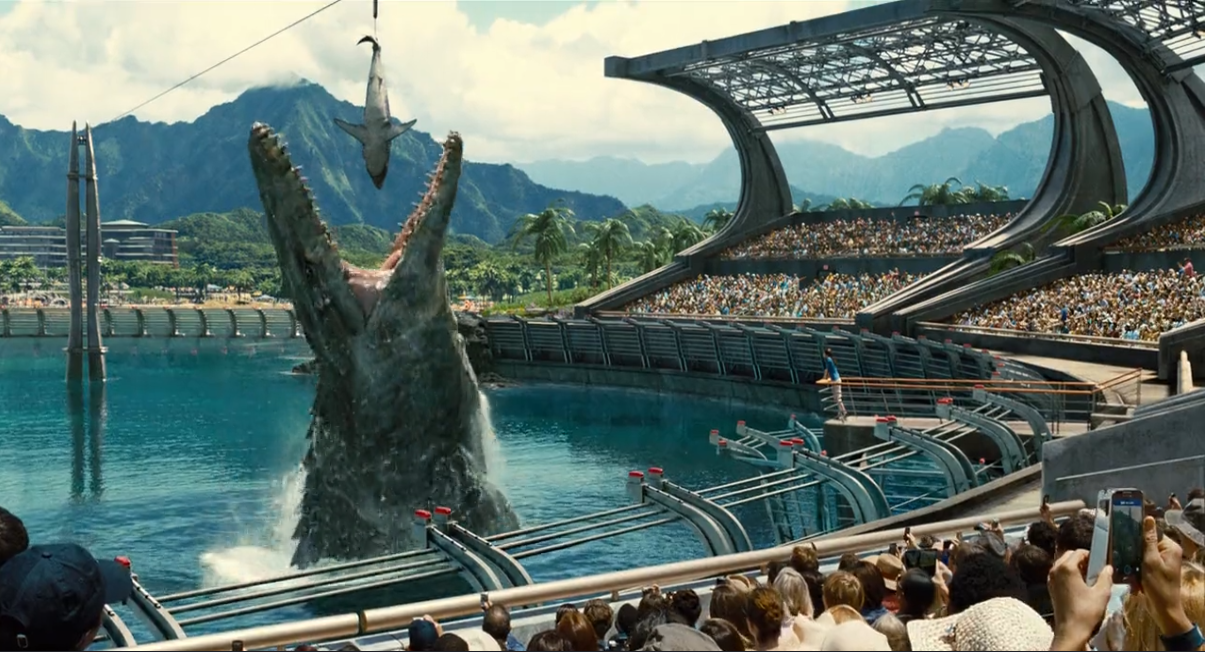 It continues to do so, by attacking the technician dangling from the helicopter

However, what is, perhaps, also relevant is that the enclosure / home of the Mosasaur is enormous....

.... so it's entirely possible that this habitat has sufficient renewable resources to continue to feed the Mosasaur. Although there is a giant gate to hold the Mosasaur in, it's quite possible that there are much smaller gates / openings to allow for water flow and / or other aquatic life to enter the habitat.

Indeed, water renewal would be a must since it would get pretty funky after 3 years.

Not the answer you're looking for? Browse other questions tagged plot-explanation jurassic-world-fallen-kingdom .