Why is there this fake window in the opening of 'Bottom'?

In the opening of Bottom, Richie and Eddie are looking out of what appears to be a fake window in a building site (see picture). I have always wondered why this is and what it is supposed to mean. 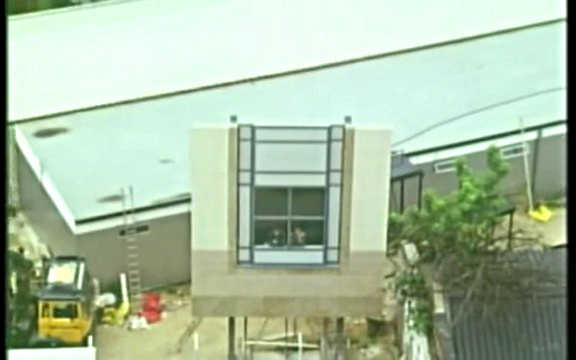 Rik references the window in an interview quoted in this BBC article:

Mr Mayall once told the BBC that discovering that the original bench had been removed was the "worst journey" he had ever made.

"If you were to come to the end of King Street where it meets the big roundabout to get to the Hammersmith Apollo, you'd find that same bench on a traffic island - until one day they took it away and put a pelican crossing in its place.

"My old bench. Me and Eddie's old bench, that's what I miss the most," he said.

He also discussed the spontaneity of how the scene came to be filmed.

"We ran around looking for somewhere to take shots, and that's when we shot us on the bench.

"And they were just building this enormous building and there's Richie and Eddie looking out of the window of a half-built place, which is also in the opening sequence.

"So I think the history of Hammersmith is very much in the Bottom show."

What we know for sure - the intro is to first give the impression they live in some spacious luxurious place from where they watch other people.

My reading - this is a jab at trope "posh people watch and talk about other people" (kind what we see with Statler & Waldorf in Muppets). In intro we see that Richie and Eddie are more interested in violence against each other than commenting other people lives and THEN the trope is deconstructed with "this is not upper east-side Westminster condo".
And then the title is shown - BOTTOM. And that tell you all about the show.

Not the answer you're looking for? Browse other questions tagged credits bottom .

69
What rules govern how TV show opening credits are structured?
20
Why do some actors in credits appear as - Character (As Actor)
97
Why do movies still have credits?
1
@Midnight end credits
2
Why do some shows have an opening credits voice over that explains the premise of the show?
6
Why were Na'Toth and Keffer in all the Season 2 credits?
31
Why does Peter Dinklage's name appear first in the opening credits?
4
Why is this music box given a prominent role in the credits scene?