Does the act of Bobby rescuing his friends affect whether or not Joyce's chains pull her down?

I just joined the Movies & TV Stack Exchange, so I hope my question deems appropriate for this site. If not, then please let me know as soon as possible; feedback is much appreciated.

BEWARE: The following question includes spoilers. The topic will be discussing about a movie rated R for Really Gory. Whoever knows who John Kramer is, will probably know what I am talking about.

In the movie, Saw VII: The Final Chapter (2010), the protagonist, Bobby Dagen, wakes up trapped inside a cylindrical metal cage in a dark room to begin his first test. "Hello, Bobby. I want to play a game." Unbeknownst to him, however, there are five tests that he must undergo, this only being the first... (mwahahahaha!)

After he grabs some kind of lever and escapes alive, simultaneously completing the test, he comes across many of his friends that he has to save. "Live or die. Make your choice." Unfortunately, he saves none of them — and they all die a tragic, horrible death. Even worse, that includes his beloved wife, Joyce Dagen, who was roasted alive before his crying eyes.

Now Joyce's neck and ankles are tied to one chain each as she witnesses Bobby's game...

..and every time Bobby enters another room, and then fails to save a friend, Joyce's chains pull her down, forcing her down to her knees. 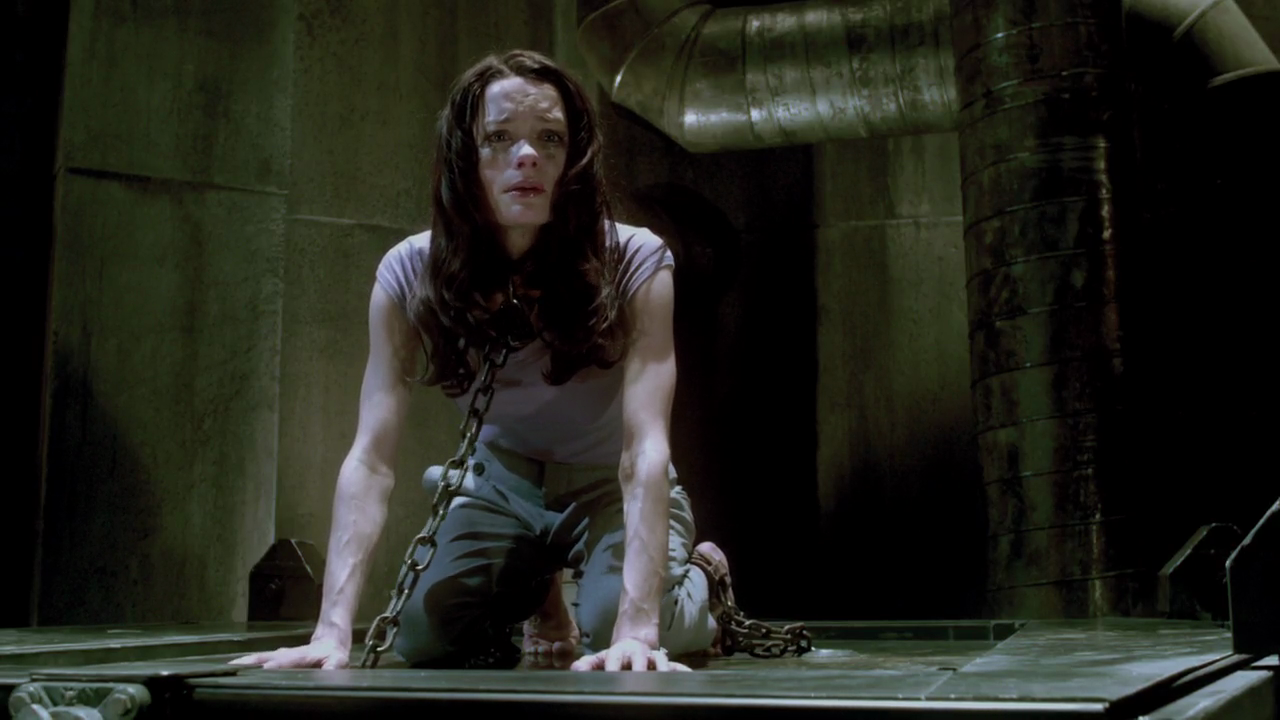 And then when Bobby has to complete his final test with a pair of hooks that he must... Oh, God, I won't say anymore. Anyway, he is so close to freeing her and saving her life, but he fails to hook himself deeper and he falls.

As a consequence, Joyce falls, too; she dies. As mentioned before, she burns to death. Here is a video, but don't worry, it is only necessary that you watch the first 34 seconds of it, just to get an idea of where it will lead.

Apologies for the language other than English.

But what if she was still standing?

The ground beneath her lowered down by about half the height of her legs, but even if she was still standing after or before that, the oven attempting to enclose her would literally crush her. So... would the ground lower even more if she were still standing? Would she die differently? Would she still be standing even if Bobby rescued all his friends?

I guess the real question is,

Does the act of Bobby rescuing his friends affect whether or not Joyce's chains pull her down?

2
Why does the escaped prisoner not return with help?
12
What was the motivation and fate of the Polish Jew?
6
Why was Amy postponing the inevitable and was it inevitable at all?
1
Why does Ivan tell his daughter to “act her age”?
26
How was Will aware of the lights?
2
Hard to kill with an Arrow
13
How exactly did Will and Barb get into the Upside-Down?
19
What was the grenade supposed to accomplish?
4
Was April trying to commit suicide?
5
Why would that kill his mother?