I recently purchased Sherlock Holmes the Definitive Collection on Audible (link) and on listening to the Sign of Four, I noted that names of Jonathan Small's 3 accomplices sounded different from what I remembered from my childhood. The names in the audio book are: Jonathan Small, Mahomet Singh, Abdullah Khan, Dost Akbar. These are the same names that appear in the Guttenberg version.

However, in 1987's Jeremy Brett version, the names of the accomplices are Kartar Singh, Inderjit Singh, and Jagodish Singh. 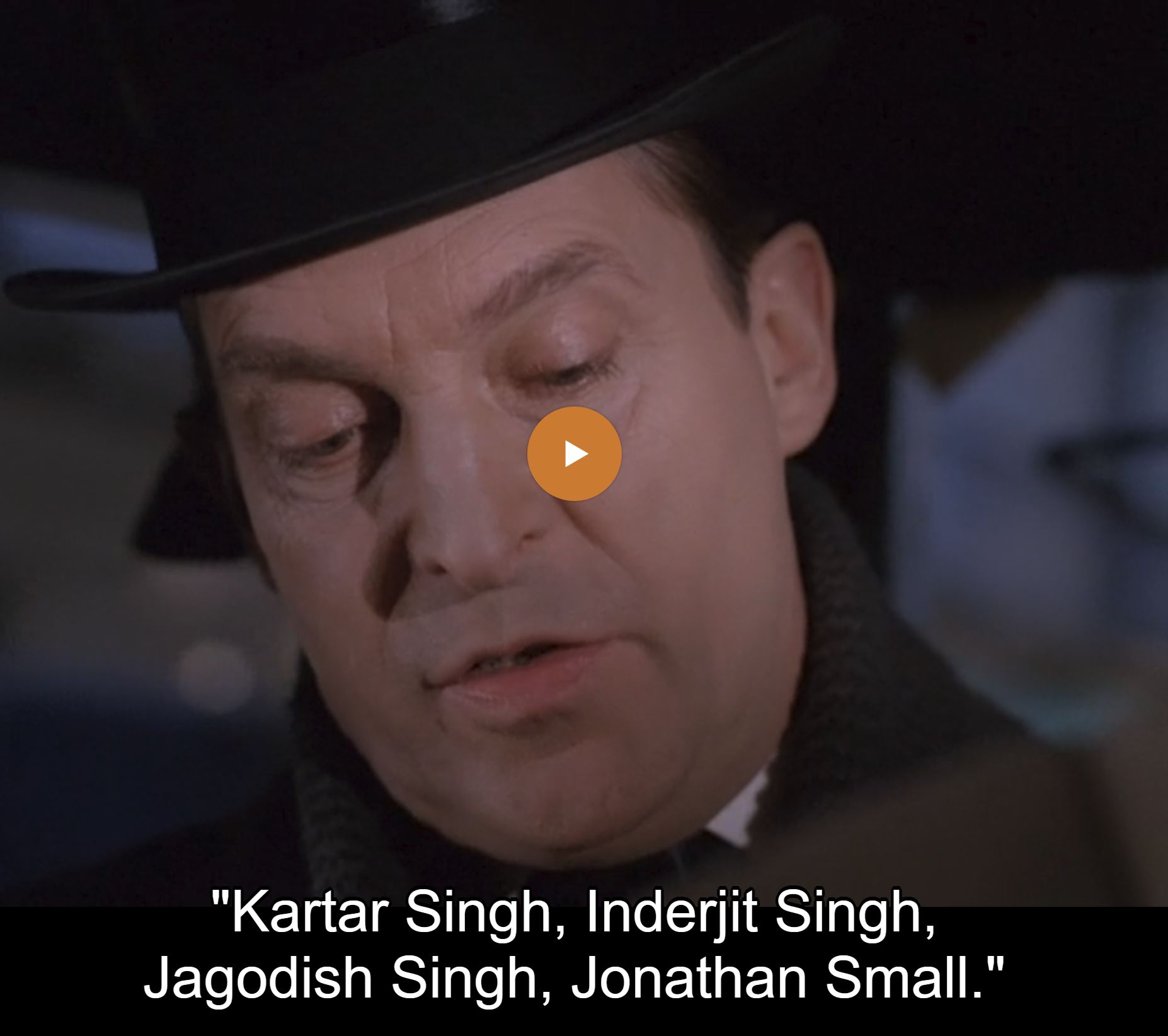 These sound more like the names that I remember but I don't have my childhood copy of SH anymore so I cannot verify. And these names seem to match better with the fact that the three accomplices are Sikhs.

Question: what is the story behind these 2 different sets of names and does either of them corresponds to what Doyle originally wrote?

The version of The Sign of The Four that is at the Project Gutenberg site says:

Two Sikh troopers were placed under my command, and I was instructed if anything went wrong to fire my musket, when I might rely upon help coming at once from the central guard. As the guard was a good two hundred paces away, however, and as the space between was cut up into a labyrinth of passages and corridors, I had great doubts as to whether they could arrive in time to be of any use in case of an actual attack.

"Well, I was pretty proud at having this small command given me, since I was a raw recruit, and a game-legged one at that. For two nights I kept the watch with my Punjaubees. They were tall, fierce-looking chaps, Mahomet Singh and Abdullah Khan by name, both old fighting-men who had borne arms against us at Chilian-wallah. They could talk English pretty well, but I could get little out of them. They preferred to stand together and jabber all night in their queer Sikh lingo.

"'Then my comrade and I will swear that you shall have a quarter of the treasure which shall be equally divided among the four of us.'

And as far as I remember those were the names that I read in The Sign of the Four.

And as I remember, critics commented that Conan Doyle gave his Sikhs Muslim names by mistake.

4) the 3 Sikh men are Mahomet Singh, Abdullah Khan and Dost Akbar. but all Sikh people have Singh as their last name. besides, Khan and Akbar are Muslim names, not Sikh names.

And sure enough, the Indian names in The Sign of the Four are likewise improbable in the highest degree. Scholarly attention has concentrated on the names of the Four themselves: Mahomet Singh, Abdullah Khan and Dost Akbar, all of whom are definitely presented as Sikhs (“Punjaubees”, natives of the chiefly Sikh province of the Punjab). Says Blakeney: “These three Sikhs have names that Sikhs would not own.” T. F. Foss, writing in 1968 without reference to 1 ‘Thoughts on The Sign of Four’, SHJ 3 no. 4, summer 1958, pp. 6-8. 10 The LOG Blakeney, makes the same observation,2 and is particularly hard on “Mahomet Singh”, though he manages to misspell it: “‘Mohamet’ is the name of a Mussulman, while ‘Singh’ is a Sikh one, and to a lesser degree, also a Hindu one.” By “Mussulman” Foss, who is affecting Victorian chauvinism, means Muslim. “Mahomet” is the old-time spelling of the name of the Prophet, more commonly “Mohammed” and more recently “Muhammad”. And “Singh”, or “lion”, is the universal adopted name of Sikh males, though it is also used by some Hindus. Dost Akbar and Abdullah Khan, Foss plausibly says, are “Mussulman, and no nonsense about it”.

John Linsenmeyer in 1975 similarly declares that no Sikh would be named “Mahomet” or “Abdulla” or “Khan” or “Akbar”, these all being Muslim words or names.3 Exaggerating a little, he compares the three Sikhs with their improbable names to “three Jewish convicts named Gamel Abdul Nasser, Francis Xavier O’Herlihy and Baron Frits van Poot”. In the same vein, Andrew Boyd in 1961 had suggested that “Watson might as well have claimed a knowledge of Scotland and then set down a tale about three simple Highland soldiers named Venizelos, Vasco de Gama, and Voroshilov.”4

Otis Hearn in 1972 suggests that Watson unconsciously replaced authentic Indian names with the sort of name he would have heard during his own experiences in Afghanistan, where there are indeed Muslims rather than Hindus or many Sikhs.5 An editor’s footnote to his article refers to a real-life malefactor who went by the name of Mahomed Singh Azad, but it seems to have been a pseudonym, and not a particularly convincing one.

These quotes should be enough to convince even people who didn't already know the differences between Muslim names and Sikh names that Conan Doyle selected very unlikely names for his Sikh characters in The Sign of The Four. That fits with with Conan Doyle often being a very careless writer, saved by being a great storyteller.

When Conan Doyle wrote, Muslim and Sikh immigrants to Britain were few and politically insignificant. But by the time of the Grenada adaptations Sikh and Muslim communities in the UK were numerous and more politically active, and the filmmakers may have wanted to avoid offending both communities by appearing to confuse them. They made a lot of other changes to the original stories to fit them into the time slots or for various, often seemingly inexplicable reasons, so making a change to avoid controversy seems like a very plausible reason.

That is my guess.

And thank you for asking the question, leading to some enjoyable research.

25
Did The Big Short movie change names or conflate characters?