Significance of the painting in Mallory's office

In Skyfall, while Bond first meets Q in a museum they are watching the painting of a ship dragged by another ship and Q remarks:

Always makes me feel a little melancholy. A grand old warship being hauled away for scrap. Inevitability of time, don't you think?

Which is rather ignored by Bond who just sees a "bloody big ship". Given that the aging of Bond (and the political aging of the whole MI6) is a major theme of the movie, it doesn't take much to see that this "grand old warship" is a symbol for Bond himself (or maybe the MI6 as a whole).

Now during the last scene, when Bond is in Mallory's (or rather M's) office and more ready to go on than ever you can shortly see another painting of a ship. My question is: What painting is that?, and even more important, Is this related to the earlier usage of a painted ship as a symbol (maybe now emphasizing the atmoshpere of rejuvenation or something the like)?

Now of course I could be overinterpreting things here and it is just, well, a "bloody big ship", but given the usage of the stolen Modigliani in the assassination scene in Shanghai it may also be that the movie indeed has a "thing" for paintings.

The painting in the museum is J.M.W. Turner's The Fighting Temeraire

This is a painting of a ship that had played an important part in the Battle of Trafalgar, but 34 years later, was being towed to be broken up for scrap. 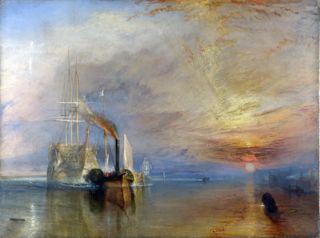 That bit was easy to work out. It is one of the most famous British paintings and I recognized it immediately.

The painting from M's office is much less well known, but is picture of the Battle of Trafalgar showing with HMS Victory with other ships. The clever part from the Writers/Director of Skyfall is that the Temeraire was the ship that closely followed HMS Victory into battle at Trafalgar where the British won convincingly against a larger force, the Temeraire capturing two "prize" ships.

The suggestion from the appearance of this pair of paintings is that we are no longer seeing a tired old warrior any more, but same warrior is seen as if reborn, ready for action. It is clearly no coincidence, and the director is using the pictures to symbolize Bond rejuvenated and ready to carry out the next mission for Her Majesty's Government.

There is a more detailed analysis in this excellent blog post. Great Question, made me look into this.

Not the answer you're looking for? Browse other questions tagged analysis james-bond skyfall .

33
Does the ageing theme in Skyfall contradict the rebooting of the Bond franchise?
12
Was Patrice hired for murder or suicide?
7
Significance of the painting behind M in the restaurant

5
Does Patrice wound Bond in the initial scenes in the right or left shoulder?
13
Why would Q attach the computer of a known cyberterrorist to the MI6 computer network?
11
Where does Skyfall take place in the Bond timeline?
3
What kind of creature bit the enemy's leg in China in Skyfall?
6
In Skyfall, why did M order Eve to "take the shot?
7
Significance of the painting behind M in the restaurant
6
Was this scene in Skyfall an homage to the 007 Goldeneye video game?
4
Significance of the painting for Chiaki and Makoto