How did Jack get to the island, and how did he become so important so quickly?

In the 2nd Pirates of the Carribean movie, Dead Man's Chest (2006), Jack Sparrow is visited by Bootstrap Bill aboard the Black Pearl. The next time we see Jack, he's on an island and clearly important as he's siting in a throne-like chair wearing makeup which was probably reserved for some type of leader. The cannibals bring Will Turner to him and attempt some sort of negotiation for him.

Was it ever explained how Jack got to the island, or how he became so seemingly important in such a short amount of time?

Near the beginning of Curse of the Black Pearl, there's a great gag where, as Elizabeth is falling off the cliff, we cut to Jack Sparrow saying "And then they made me their chief." 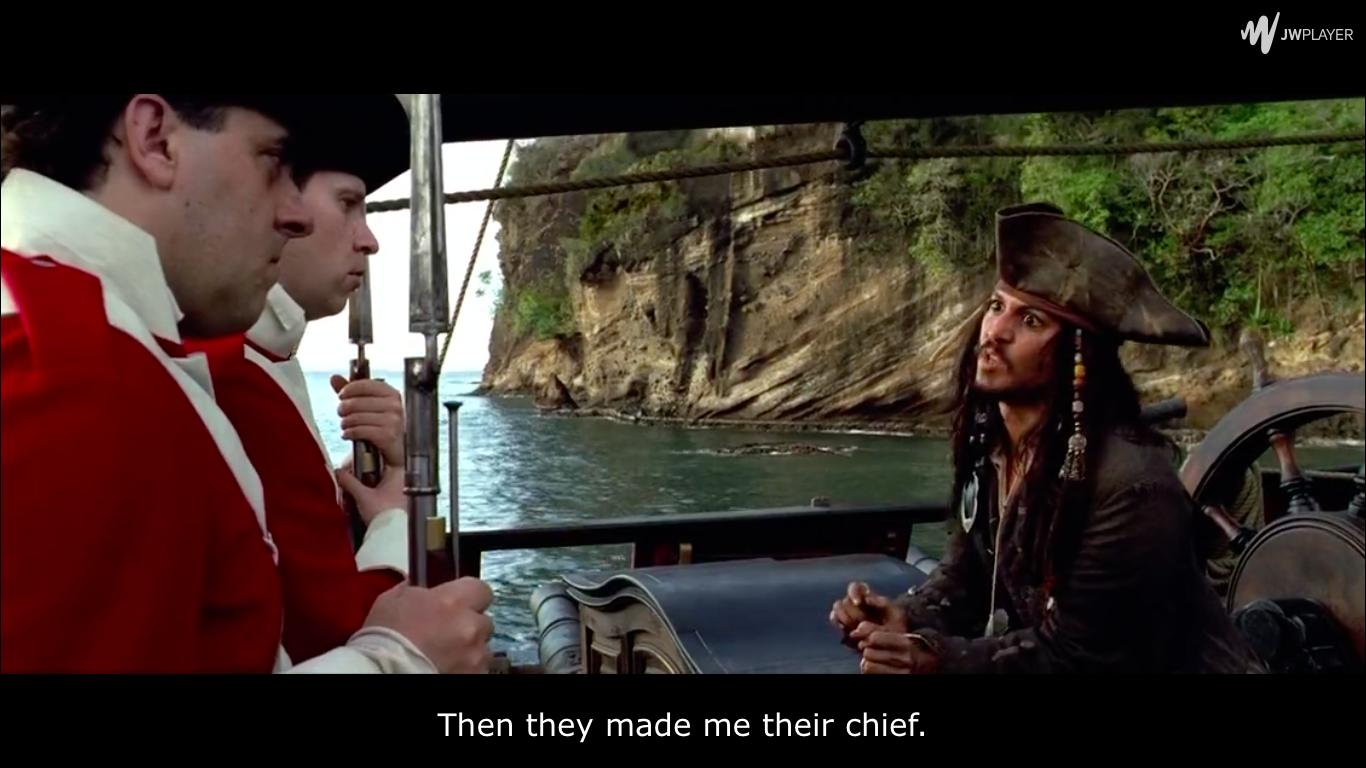 This was an improvised line, and at the time didn't refer to any established backstory. In the DVD commentary for Dead Man's Chest, the writers explain that the Pelegostos are the tribe who made Jack their chief—that is, they invented a backstory for Depp's joke for the purposes of the new movie.

So Jack didn't have to become that important in the limited time he spends offscreen in Dead Man's Chest; he already was their chief, and this was his triumphant return! This also helps to explain how Gibbs already knows about the religious traditions of the Pelegostos: Presumably they had attempted to release Jack from his fleshy prison during his first visit.

But why would Jack return to an island where the natives want to kill him, and how did he get there so fast? I suspect both questions have the same answer: The island of the Pelegostos happened to be the nearest place that was safe from the Kraken. Jack knew where the island was, he knew that the natives would be friendly (at least initially), and although he knew of the danger, in typical Jack Sparrow style he assumed he would escape somehow.

How he became important, this is explained by Gibbs in the cage

Will: Why would he do this to us? If Jack is their chief.
Gibbs: Aye, the Pelegostos made Jack their chief. But he only remains chief as long as he *acts* like a chief.
Will: So he had no choice. He's a captive then as much as the rest of us.
Gibbs: Worse... as it turns out. See, the Pelegostos believe that Jack is a *god* in human form, and they intend to do him the honor of releasing him from his fleshy prison.

Gibbs: Argh! They'll roast him and eat him.

after when the crew makes their escape the Pelegostos look toward that dog who always has the keys who was barking and begin chasing it. post credits we see that the dog is the new chief and very likely taking Jack's place as the "god trapped in fleshy prison"1. either way we can probably assume that the Pelegostos aren't too choosy who becomes their chief is since they made a dog their chief. hell, they might end up just choosing any non Pelegostos they see because they probably all end up becoming lunch.

As for getting to the island, obviously they sailed there but there was no purpose for them choosing that island in particular, Jack just wanted to get to any landmass

Jack: On deck all hands! Make fast the bunt gasket! On deck! Scurry! Scurry-on Marty, I want movement!
Jack: *I want movement!*
Gibbs: Lift the skin up!
Jack: All on deck! Run! And keep running! Run as if the devil himself and itself is upon us!
Gibbs: Do we have a heading?
Jack: Ah! Ooh! Run! Land.

[Jack rises from where he was ducked behind the base of the mast, sees Gibbs again]

this came after he got a visit from Bootstrap Bill and getting the Black Spot indicating that Davy Jones was now coming after him with The Kraken.

Jack: Any idea when Jones might release said beastie?

[Jack looks at the palm of his left hand, where a black spot boils into view]

[Jack looks up, but Bootstrap has disappeared]

best way to avoid said terrible beastie? going ashore where not only can it not get you but (as we learn from Tia Dalma) Jones can't go on land either for at least a few more years

1: we know the dog escaped to with the help of sea turtles because it was at Pirate's Cove in World's End giving Captain Edward Teague the keys to Morgan'S and Bartholomew'S Codex