What is the significance of the iconic imagery in the ending of Dredd?

There are two things that stand out visually at the end of Dredd. When Dredd finally confronts Ma-ma in her apartment there is a display of guns and a jacket on the wall. When Anderson is laying down on the ground there is a wired figure of a tiger.

Iconic Imagery Of The Jacket

The display on the wall is interesting as the jacket is hung as if it was a shrine. There appears to be a sleeve missing and a gang insignia of a clown.

Here is a close up of the jacket. I can't make out the words, but would be interested in knowing what it says. 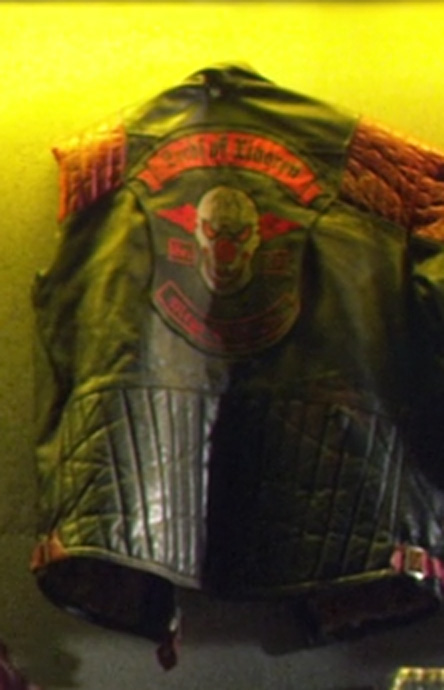 During this end sequence we see a quick shot of Anderson on the floor with a wired figure standing near her.

There is a scene in the film were the computer hacker guy that Ma-ma used to control the building was making a wired figure. He is only shown once in the film doing this, but it's safe to say that the figure at the end of the film was likely made by him.

I have a theory for the jacket, I noticed that in the initial part of the movie where they make the reference to three gangs who fought for control of peach tree namely

Its shown through a bunch of sequences as Mama clan try to fight for control and the last gang they eliminate is shown to be The Judged and Mama is shown to take the jacket from the last member of the Judged clan who was shot in the back multiple times especially around the logo area. Judging from the way she looked at the jacket i would assume that it was the same jacket and there is a bunch of different logos been shown for all three gangs with the bullets taken into account at the back of the jacket. I think the clown logo could be an addition Mama added to that jacket or it could be the logo they were trying to base for themselves.

As for the other 2 questions I am trying to wrap my head around those but i was unable to find anything on the extras of blu-ray pertaining to it. I will edit this post further more when i find more add on this. The only thing i can think of right now is Anderson let go of the hacker who made that wired tiger and when she lets him go she even remarks to dredd stating that its the only difference she can make and when she looked the tiger again I think she exclaimed recollecting that tiger from the hacker guy's mind reading process earlier.

I hope the theory for jackets works out ;)

That whole wall seems to be an imitation of judge's gear. Helmet, jacket, assortment of weapons. You'll remember the movie starts with Dredd putting on his gear.

The imagery hints that Ma-Ma is no different from the judges (a running theme in the movie) and given that judges aren't even around most of the time she's a more legitimate authority. The clown just underlines it: The justice system in Mega City 1 is a joke.

(I'm reading the text as "Proof of Liberty" but could be something else, too. "Price of Liberty" ? That'd make sense thematically.)

Looks like the jacket kind of says "prop of" something or "proof of" something. Maybe the former. The way I hope it turns out is that's the jacket of the pimp she killed and he was one of the leaders in a gang. After she killed him she ran off to start her own thing so she could take on the rest of that gang. It would make sense since in the movie she spoke of expanding her power. For what? And she probably kept the jacket as a shrine. All speculation but yeah.

Turns out the jacket belonged to the leader of the "Judged" gang. In the movie it shows them gunning down one of the members and its the same jacket. His should have holes so i'm guessing the one mama has is the one she took from the leader.

I noticed the wire tiger on my second viewing, I've just watched it again for the fourth time (I do love it!).

According to Alex Garland one of the crew made models from wire and he made the tiger; it does seem far too haphazard to put someone's little model in.

I had jumped to the conclusion that it was like the origami at the end of Blade Runner, but Anderson had no secrets to hide. Mind you Kay who was sent to execute Anderson could still be around, although injured we didn't see him die, and the film seldom spared us the gore.

One of the interpretations of the paper unicon at the end of Blade Runner is evidence that Deckard is a replicant or synthetic human created for a purpose. Is it possible that Dredd is synthetic, created to bring the law to Megacity One. The film mentions that Judge numbers are so low they can only respond to 6% of crimes - synthetic Judges would be necessary. Also when Anderson is reading Dredd she says something like "and there's something else too..." and gets cut off by the Head Judge.

As I said, just a thought.

I think the jacket is a trophy from killing a high ranking member (possibly the leader) of a rival gang. The Judge's helmet seems to indicate that she keeps trophies like this, and seeing as they are displayed over the bed, I think she is showing them off. A woman like MaMa obviously feels the need to display her power often and violently, so it makes sense to me. We saw her techie kid making those wire figures the first time he appears in the movie. The fact that she keeps one in her apartment could mean that she has some kind of feelings towards the kid, even after she maimed him, or she just likes them. It does seem strangely sentimental for such a hard woman to keep such a useless object though.

Ma-Ma is seen playing with a sculpture during the scene where Techie initiates war protocol, shutting down the block. It can be assumed she takes them from him because she likes them. In fact, in the final scene where Ma-Ma is confronted there are in fact 2 wire sculptures. One on the floor by Anderson and the other on her bed.

The sculpture is symbolic of Ma-Ma's humanity. She was not always so cruel, circumstance made her that way. The first sculpture is on the floor, far from her. This representing her humanity as of late and in that moment. But when faced with death, amidst the blood and pills the sculpture is prominently on show and close to her.

Prior to taking control of Peach Trees, Ma-Ma was a prostitute. Lester Grimes, her pimp, one day found out that Ma-Ma intended to leave him. She was in a relationship with a man named Eric. Eric was an intelligent man. He was skilled with computers, chemistry and circuitry. It was in fact Eric who invented Slo-Mo, with the intent of it being a way for him to provide for Ma-Ma.

Eric was eventually tracked down by Lester Grimes. He broke into his apartment and killed him brutally. Stringing him up on the wall, Grimes then waited for Ma-Ma to arrive. As expected the event traumatized Ma-Ma, she was reminded of her place and who she "belonged" to. Grimes then gave Ma-Ma her signature scar as punishment.

Techie is in some way reminds Ma-Ma of Eric. She treats him horribly but yet finds his work impressive. She has some attachment to him and likes his sculptures enough to take them for herself.

In the final scene the objects in her trophy case, the items strewn across her bed, represent her as a person. They are quite blunt pieces of symbolism but effective if time is taken to learn her backstory and dissect her character. None of the items are more important than the sculpture.

The jacket and guns showing her conquest, the judge helmet showing her disdain for authority. Her outstretched arm in the light reaching for her gun says quite a bit as well. The idea that she would sleep with a gun speaks for itself. The gun being lit signifying the path she chose and where it got her. While the pills, sculpture and her own blood are in the dark. Contrasting how she appears on the outside to what is behind her cold eyes.

(It can also be interpreted that the light shows she died by the gun and not by drugs, as one would assume)

In the end, she made poor choices but all the same was corrupted by the cruel world she and millions of others inhabit. With all the damage caused by her, there is an attempt by the director and writers to paint her in a sympathetic light.

I could be more specific, but in the end once you notice these details the picture paints itself.

In Ma-Ma's penthouse there is a Judge's helmet hanging on her wall with a length of gold chain attached to it, a nod to the comic design of Judge Dredd where the gold chain would link the badge to the uniform collar

Adding to the earlier point about Deckard's dream of the unicorn and the folded unicorn in Bladerunner, I would say it is entirely possible that they placed that little tiger figure there as a form of reference - maybe as an afterthought without purposely intended symbolism as Bladerunner had.

If you look at the cinematography of Dredd, you see that many shots resemble Bladerunner. That is not to say they copied it, but Bladerunner did reinvent sci-fi for the 80s and its influence is still felt through many of these films (especially the ones that are non-stock-Hollywood). Actually there are some similarities with Luc Besson's Fifth Element too.

I wouldn't be surprised if there are nods to those types of films in more than just the cinematography.