Why does the movie “Adaptation.” have a period in its title?

I noticed on IMDB that Adaptation. has a period at the end of its title. This can also be seen on its poster. 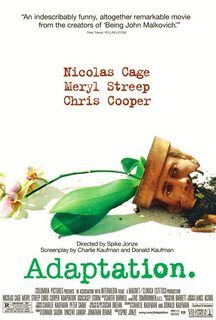 Usually titles and headlines don't use periods except for abbreviations, so why did they use one here?

Adaptation is an adaptation of the nonfiction book The Orchid Thief and is a "metafilm".

Adaptation. is a 2002 American comedy-drama metafilm directed by Spike Jonze and written by Charlie Kaufman. The film is based on Susan Orlean's non-fiction book The Orchid Thief, with numerous self-referential events added.

The self-loathing Charlie Kaufman is hired to write the screenplay adaptation for Susan Orlean's The Orchid Thief. Kaufman is going through depression and is not happy that his twin brother, Donald, has moved into his house and is taking advantage of him. Donald decides to become a screenwriter like Charlie and attends one of Robert McKee's famous seminars. https://en.wikipedia.org/wiki/Adaptation_(film)

So the title reflects several things relating to a multifaceted approach to the word, adaptation, because that is what the film is about:

The film is not only about the experience of the writers searching for meaning in life in order to write the most amazing thing (ie: taking credit), but also examines the differences between what gets written vs what the actual experience were and therefor, it scopes out to both the natural reactions to the experiences the characters have and/or the reality that a writer in many fields are subjugated to certain truths held by industry standards. In other words, it showcases the struggle of subjugation itself and so the period is then proof of this notion and/or an ironic conceit in that surely there is more story to tell.

It's a movie about screenplays. And good screenplays have good punctuation. Period is usually not used in titles or headlines because they should lead eyes to the article or poster.

But in this case it's not only a nod to the topic of the movie but also a FULL STOP. and what is a Full stop in the context of this movie? You need to figure it out.

Not the answer you're looking for? Browse other questions tagged title adaptation-2002 .

20
Why was the title changed to Dark Kingdom in the German release?
5
How does Te3n justify its title?
8
“Kubo and the Two Strings” symbolism?
14
Why does the DOA: Dead or Alive film have an additional DOA in the title?
3
Why the movie title “The Score”?
27
How does the movie Spirited Away justify its title?
6
Caligula Malayalam Short Film: Why did they choose 'caligula' as the title?
3
Why the movie title “The Big Sleep?”
3
Origin/Meaning of the title “The Blackcoat's Daughter”
2
Why does The Magicians episode have this title?