Why does Firefly include a scene with a missing yoke?

In the first episode of Firefly (Serenity), there's a scene where Serenity escapes from a pursuing Reaver ship. After they get away, there's a brief shot of Wash and Zoey while the other crew members express relief at their escape.

In this shot, the yoke (steering wheel) is completely missing. 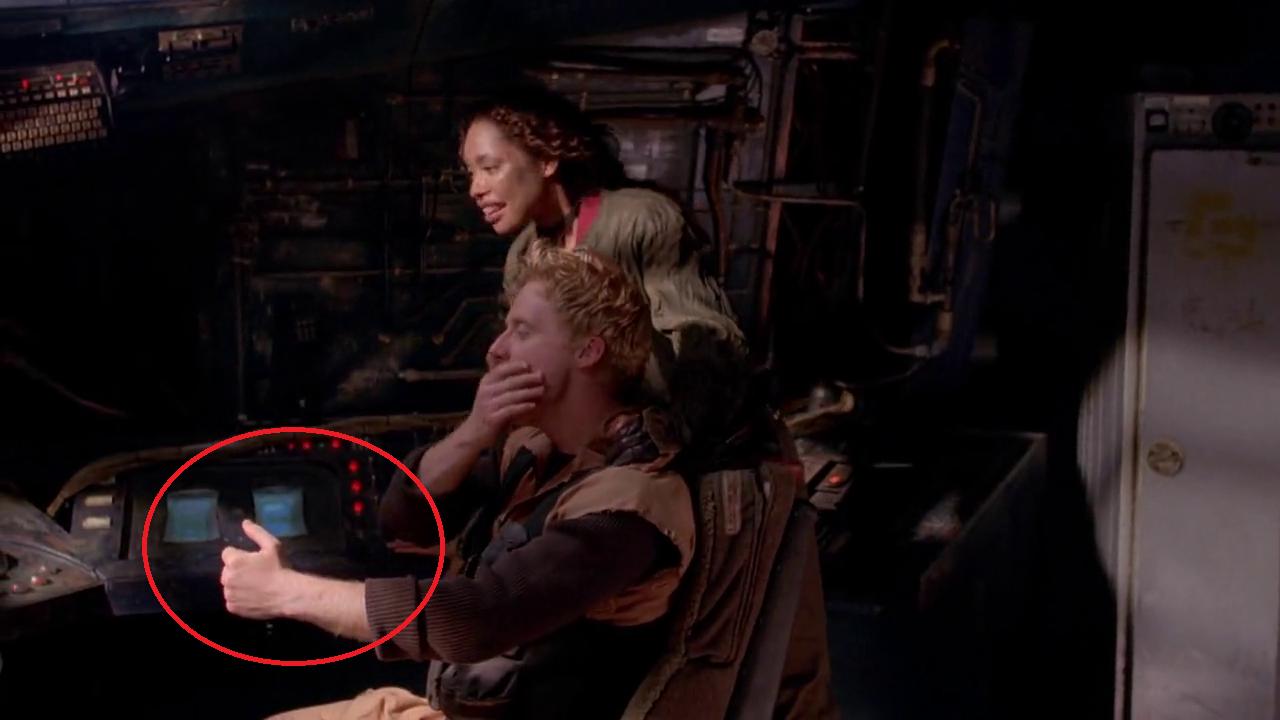 It's particularly odd because there's another shot only moments later where they yoke appears as it should. 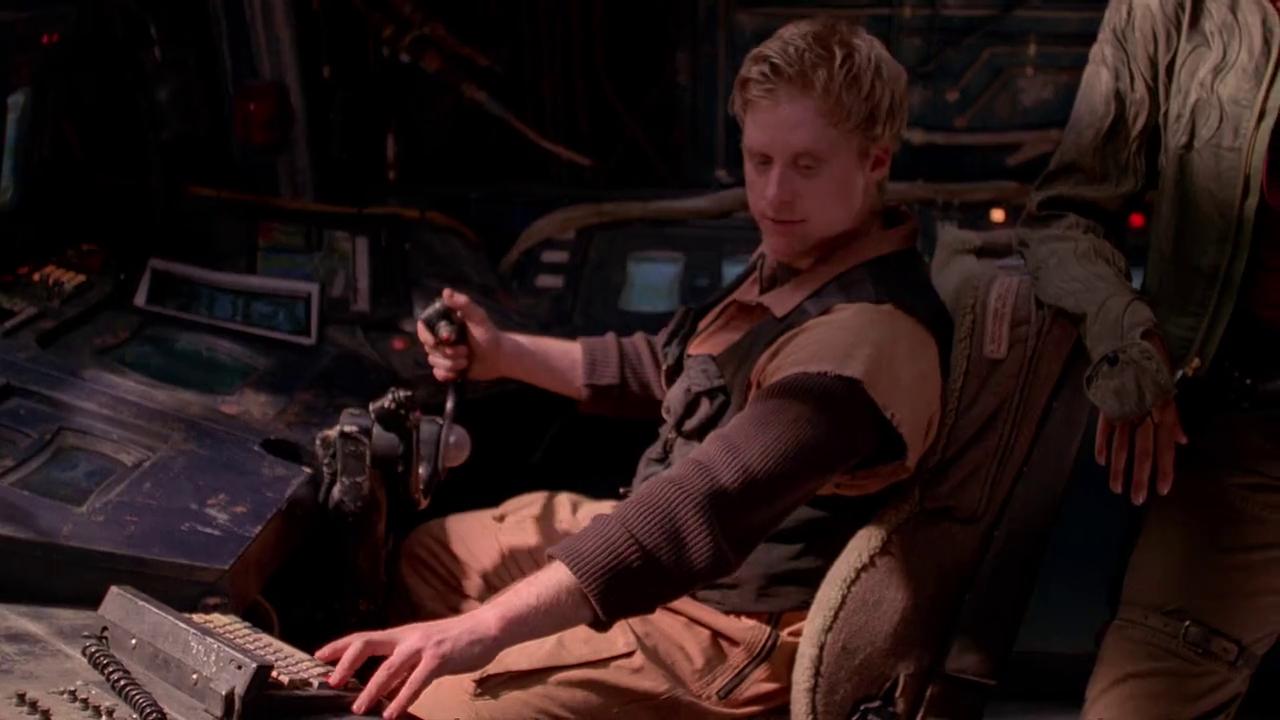 Why was this shot included in the official release?

Did they run out of time to reshoot the scene?

Did an actor have a reaction that was difficult to reproduce?

(I welcome speculation, but I'm hoping for an answer that can be attributed to someone in the Firefly production staff.)

This is covered in the Firefly DVD commentary track.

To get the wide shot they had to pull Alan Tudyk's chair back from the console/yoke and Alan Tudyk mimed as though he was still holding the yoke.

Now if we look carefully, I believe that we will see Alan is not holding anything!

Nobody noticed, we had to pull the chair back to get the shot and nobody noticed he was miming it and we still used it!

Late edit: While I was figuring this out the hard way, Paulie_D got the same info from the DVD commentary... I'll call it parallel thinking ;-)

Between the first and second pic the camera has moved in towards the actor, but also across [camera right] & panned camera left. If you look at the only really distinctive markers on the console, the green/blue screens & two white 'dots' in front; compared to the sloped part at the left of shot [which is behind his hand in the 2nd shot] then it would be a reasonable guess to say it's just out of shot.

I also feel the chair itself has moved forwards a couple of feet - i don't know the show so I don't know if that is a sliding chair or a continuity error, but there's no way he could reach the front console in the first shot.

Here's a quick interpretation of the "map" as I see it.
Blue squares used to try to estimate in "numbers of screens" the console distances at the rear.
Red rhomboid rectangle thingy, to try estimate where the chair back is pointing at.
Green squares, a guess at how far in front of the blue screens we may be seeing. 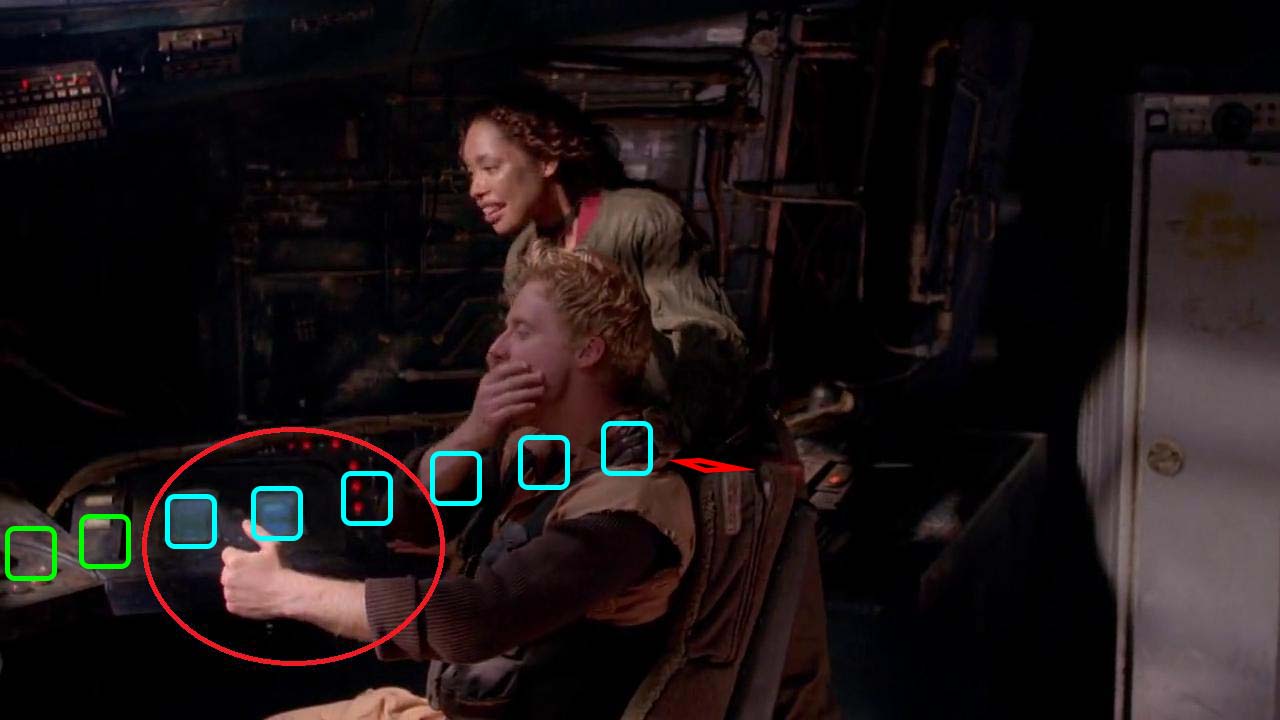 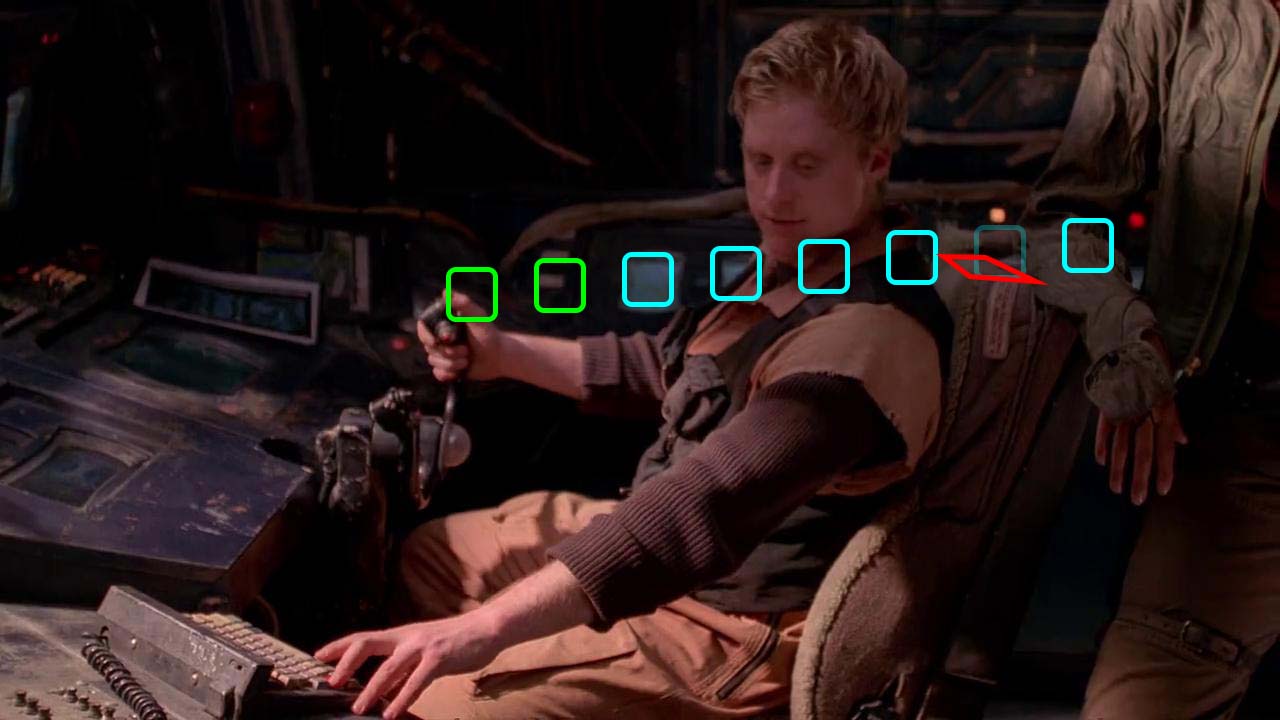 Additionally, if he were to try reach the yoke in the first shot, not only would he have to lean forwards a long way, but he'd also have to twist a whole lot more. The yoke is well out to his right... definitely not built for left-handers.

As far as I remember, this was done because Whedon wanted to film the series in anamorphic widescreen (1.78:1 aspect ratio), but the Fox insisted on broadcasting the episodes in 4:3.

Whedon shoot wide for the incoming DVDs, keeping in mind only the center of the image would be seen on TV. This led to some scenes on DVDs (and later blu-rays) in which objects or installations not visible in the original 4:3 broadcasts are now visible (such as the invisible yole).

Not the answer you're looking for? Browse other questions tagged production firefly production-mistakes .

17
How was the opening scene with the fly made?
45
Why is Pulp Fiction's opening scene different to the one near the end?
1
Why are some principal characters missing from some TV episodes?
21
Erroneous scene with the studio's parking lot in the original Star Wars release
4
Why does 13 Hours look like it's been filmed with a camcorder at times?
9
If Firefly's Mal Reynolds is a sergeant why does Zoe call him "Sir"?
6
Why the did the Alliance destroy the scuttled settler ship in Episode 3 of Firefly?