In the Star Trek episode "Whom Gods Destroy" (1969), I consider the character Garth a George Washington figure (whether consciously intended or not). He was a great military leader; also, his "consort" is named Marta (compare Martha). There's also a resemblance, both physically and in body language. (The narrative may also have been inspired by Douglas MacArthur, in that Garth has lost his mind, wanting to be addressed as "Lord Garth.") Steve Ihnat as Captain Garth: 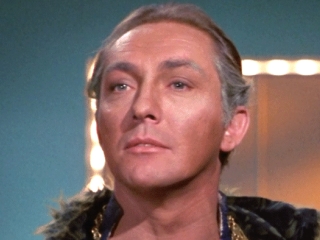 It's possible other Starfleet captains evoke figures from U.S. history. (Of course, James Kirk has been compared to JFK.)

Specifically, I'm asking about Captain Ronald Tracey of "The Omega Glory" (1968). He too has gone power-mad, on a planet he believes holds the secret to immortality. He breaks the Prime Directive by taking sides in war between the "Yangs" and the "Kohms," or Yankees vs. Communists. (It's probably not relevant to the question, but neither of these is considered a good episode.) Below, Morgan Woodward as Capt. Tracey: 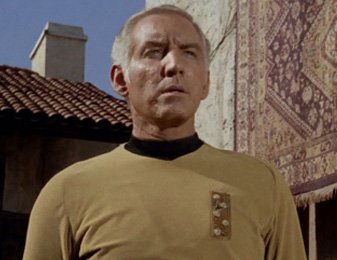 Also secondary: the conscious intent of the filmmakers. As a longtime fan, I don't remember anything particularly interesting, in interviews, regarding "The Omega Glory" (Gene Roddenberry is the credited writer). Note: I haven't yet read These Are the Voyages by Cushman, which seems to be an important reference.

I realize the two characters pictured resemble each other, to some degree, but there seems enough difference to ask the question. Also, Tracey doesn't seem Washington-like: whereas Garth strikes patrician poses, Tracey is more gritty and intense. He also retains his skills, with his fall-from-grace being solely due to choices.

Regarding the intent of the production staff:

Director McEveety said "Morgan Woodward was the one I user mostly [in various shows], because he was such an interesting character, I thought. He gave such dimension to a character. He could play crazy and he could play very nice. And, by saying dimension, I'm saying you could get elements of both at the same time. Good and bad. Real." Woodward had previously appeared on Star Trek as Simon Van Gelder in "Dagger of the Mind", which was also directed by McEveety. The two men knew each other from Gunsmoke. By the time the western left the air in 1975, Woodward held the record for the most guest appearances on the screen, with 19.

-These Are the Voyages: Season Two - Marc Cushman

In short, the director chose the actor because they had a) already worked on Star Trek together before and the director liked the actor's ability. There is no indication that Woodward was chosen for any real-life analogous reason. Also, consider that the episode The Omega Glory, while produced and aired in Season Two, was originally written as one of the options for the second pilot (following The Cage)

Not the answer you're looking for? Browse other questions tagged character analysis star-trek historical-accuracy star-trek-the-original-series .

5
Star Trek TOS Season 2 - how long does the change in musical style last?
10
Who is the "Lee Kuan" mentioned in Star Trek TOS?
7
What plays are the Shakespeare quotes in Star Trek VI from?
3
Music player device from Star Trek Beyond
6
How come they couldn't heal Captain Pike's injuries in Star Trek?
72
Do Star Trek characters wearing red shirts have the highest death rate on the original show?
15
Was the Star Trek episode Catspaw originally intended as a Halloween episode or was it just coincidence?
18
Why did the original Star Trek change the Enterprise captain?
6
Was there cigarette smoking on "Star Trek (The Original Series)"?