Did Jim ever truly hate Dwight during the course of The Office?

Jim and Dwight's rivalry is one the biggest hallmarks for the show The Office, with both attempting to prank the other (mostly Jim) at any opportunity given.

But does Jim pull these pranks because of a strong dislike for Dwight, or were these pranks friendly fire after all?

We all know that Jim and Dwight's rivalry comes to an end towards the end of the show itself, but what if Jim saw Dwight as a friend to begin with? 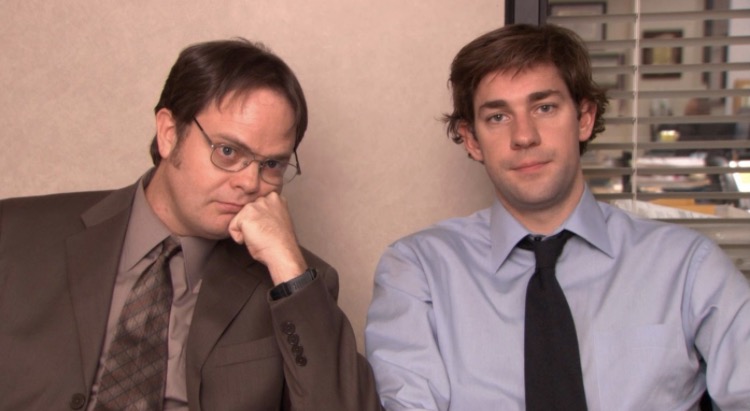 Jim doesn't consider Dwight a friend from the start. But that doesn't mean Jim hates Dwight.

From as early as S01E02 Diversity Day, we see that Jim has a big sales call lined up, as every year, which covers 20% of his commission. So every year he buys a bottle of champagne to celebrate. But during Diversity Day, Michael keeps Jim occupied with the office meeting. Dwight rings up Jim'a client and steals his sale and commission. Dwight doesn't do it out of malice though, he's just pranking Jim back. Jim, instead of flipping out and accusing him of stealing his biggest client, just places that bottle of champagne on Dwight's desk as a "well played" gesture.

Jim and Dwight become friends during that staircase scene where Dwight is heartbroken over Angela and Andy. Jim consoles him by sharing his emotional distress during Pam and Roy's relationship. This shared emotional moment solidifies their friendship for viewers as well as themselves. They both know, irrespective of the pranks, at the end of the day they care about each other as friends.

"Hate" is a big word. Especially in earlier seasons, you can argue that Dwight "hates" Jim more than the other way around, since Dwight is often the instigator.

Dwight plays the role of "office police" when he in fact does not have the authority to do so. Dwight antagonizes people while he's busy trying to "win" the game (in Dwights mind, he is competing for a position of authority).

Dwight consistently behaves as a superior to others, and often introduces (verbal) hostility towards others for no reason other than Dwight wanting to be in charge.

So, to answer your question, it would be more accurate to say that Jim hates Dwight's self-aggrandizing behavior more than he hates Dwight himself. However, the two can in some cases overlap, especially in cases where Dwight is constantly antagonistic.

Not the answer you're looking for? Browse other questions tagged character the-office .

7
How did Pam become the office administrator?
28
Why did The Dude hate The Eagles so much?
9
Did the DCAU ever hint about Harley Quinn's bisexuality?
5
Did Cartman truly change during season 20?
8
Did Jim turn down the corporate job?
7
Why did Will Ferrell have such a short run on The Office?
4
Why did Michael and Phyllis from The office not roast each other?