In spy movies, there are often sequences showing an overview of the ocean or a city, with a location like "SOUTH PACIFIC SEA" being written, letter by letter (often uppercase / fixed width / green / segment-based) on the screen, with a tiny, morse-like, digital sound being played for each letter.

Does this sound effect originate from some kind of historical intelligence apparatus, like a telex machine, a teleprompter, etc.? Or is it purely a Hollywood invention that is repeated by convention.

Graphics styles change over the years; while they're popular, they usually refer to some currently popular theme or trope.

Right from the 1950s and even up to the 80s & 90s, 'secret spy computers' were "the thing".
By this time, the general populace would recognise what a computer green screen looked like - so they tended to be used for anything vaguely 'technical'... 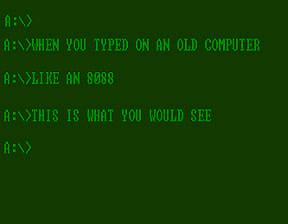 It doesn't take much stretch of the imagination to see this kind of typography being used as an on-screen graphic.

The 'type it a letter at a time with noises' trope comes from the earlier days of the Telex, where someone would actually be sitting at one end of a telephone line, typing 'live' to a paper strip printer - actually an electric typewriter, in effect - at the other.

"Everybody knows" that computers make beeping noises, of course ;-)

With a bit of artistic license, you can overlay the methods.

What you're looking for is called Telemetry. A short description is:

Telemetry is an automated communications process by which measurements and other data are collected at remote or inaccessible points and transmitted to receiving equipment for monitoring.[1] The word is derived from Greek roots: tele = remote, and metron = measure. Systems that need external instructions and data to operate require the counterpart of telemetry, telecommand.[2]

Telemetry has a long military history dating back to the 19th Century. Telemeters, the devices used to transmit the data, do make sounds similar to typewriters, as well as sounds similar to what you hear in the scenes you inquired about.

Not the answer you're looking for? Browse other questions tagged sound-effects origin .

11
What is the origin of Harem Anime?
43
Why do old movies sound like old movies?
16
Why do punches sound like a "slap" in older movies?
53
Why do movies think the speed of sound is as fast as the speed of light?
5
How are the sound effects of the Shaw brothers martial art movies produced?
6
Do sound effects, specially in horror movies, use emotion initiating frequencies?
6
What is the difference between Sound Mixing and Sound Editing?
4
What movie does the dramatic sound effect come from?
36
Origin of the whistling sound when things fall